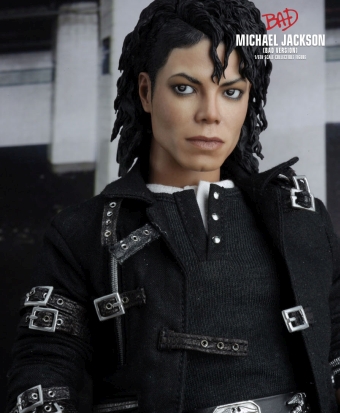 The Internet has been buzzing with this release for a few days now, but the item is finally available for pre-order – the latest action figure from Hot Toys in their Icon series – Michael Jackson – immortalized as he was in 1987, when he appeared in the Martin Scorsese-directed video for his worldwide hit single “Bad”.

This 1/6th scale collectible figure featuring the King of Pop has the usual Hot Toys high quality authentic head sculpt, multi-layered stereoscopic hair sculpture and a highly detailed costume, not to mention the high realism of the Parallel Eyeball Rolling System (PERS). The figure also includes extra clothing items if you prefer to have your Michael Jackson perform “Dirty Diana” as per the 1988 music video. And with a staggering 38 points of articulation this figure can really move!