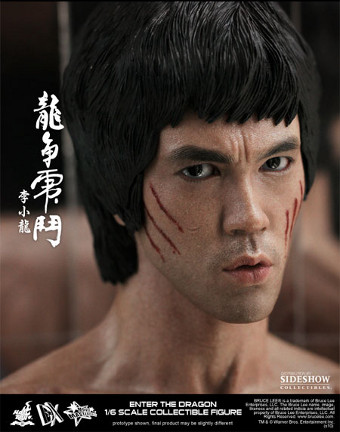 If you’re a Bruce Lee fan and action figure collector you’ll certainly be aware that 2010 marks the 70th anniversary of the birth of the martial arts superstar who was born on 27 November, 1940. To celebrate the occasion this stunning action figure will be released in the autumn from Hot Toys featuring the actor as he appeared in his final film role as Lee in Enter the Dragon. The 12-inch action figure body has an awesome 30 points of articulation and is also equipped with masses of accessories, weapons and no less than fourteen interchangeable palms.

The figure is part of the Movie Masterpiece Series – DX collection by Hot Toys and if the pre-release photographs are anything to go by this really is a masterpiece, with the list of artists behind this figure reading like an industry who’s who of the absolute maestros of 1/6 scale sculpture – Yulli, Noh Sung Woon, Kouhei Okui, JC Hong, Kojun, Lim Young Jin and Cha Tae Jin.

The two sculpted heads are an excellent likeness of Bruce Lee with movie-accurate facial expressions with every detail included – one with scratches and scars on both sides of face, an intense look of concentration and lips pursed as if he’s taking in a short breath before battling an opponent. The figure also uses top of the range Parallel Eyeball Rolling System (PERS) for added realism.