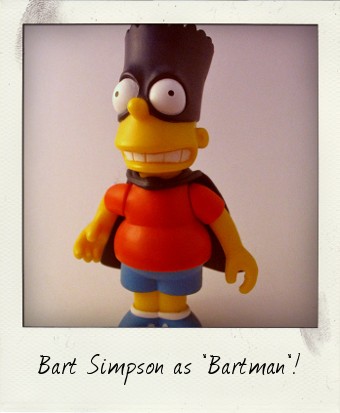 When in the spring of 1987 Matt Groening created a series of short animated sketches for The Tracey Ullman Show – The Simpsons – who could have imagined that those early incarnations of Homer, Marge, Lisa, Maggie and Bart would eventually become cultural icons in what is now officially the world’s longest running sitcom ever.

Regulars on The Tracey Ullman Show for three seasons, The Simpsons then premièred in their own half-hour series, on December 17, 1989. In 2000 they were even given their own star on the Hollywood Walk of Fame! A television smash for years, their move to the big screen in The Simpsons Movie, a feature-length film, released in theatres worldwide on July 26 and July 27, 2007, also broke box office records.

Of course, action figures of numerous cast members of The Simpsons have appeared over the years. Whilst McFarlane Toys and the World of Springfield action figures line created by Playmates Toys fill many collections, the vintage action figure collector should probably look to the earliest series of Simpsons action figures ever produced – the 1990 Simpsons action figures by Mattel. The original range consisted of Homer, Marge, Bart, Lisa, Maggie, Nelson Muntz and Bartman, Bart’s alter ego. Each figure came with its own accessories and a word bubble which could be plugged into their heads and was designed to hold four different “phrases”.