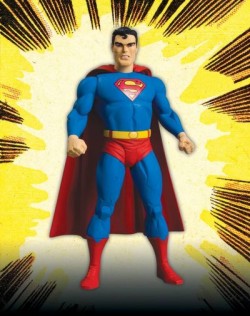 This Superman action figure is based on the enormously influential and instantly recognizable comic book art of Jack Kirby. Working with the writer Stan Lee, Kirby started out with the fledgling Marvel Comics during the 1960s, creating world famous characters such as the Fantastic Four, X-Men and the Hulk. In 1970, however, the disgruntled Kirby moved to rival company DC Comics where he created a series of comic books under the umbrella title of  The Fourth World including brand new titles like New Gods, as well as what was then the lowest selling Superman title, Superman’s Pal Jimmy Olsen.

This action figure arrives hot on the heels of the acclaimed Jack Kirby Fourth World Omnibus hardcovers. Kirby’s art style is interpreted in this second series of Fourth World action figures, which includes his unique vision of Superman!

Each figure features multiple points of articulation and a base and is presented in four-color blister card packaging.