The Justice Society of America, or JSA, the  superhero group created by All-American Comics ( later DC Comics) has the distinction of being the very first team of superheroes in comic book history. Emerging during what is now thought of as the Golden Age of comic books, the group first appeared in issue 3 of All Star Comics (Winter 1940) and featured lesser known characters - in fact, it was designed rather as a springboard to launch the heroes who would later go on to have their own comic … END_OF_DOCUMENT_TOKEN_TO_BE_REPLACED 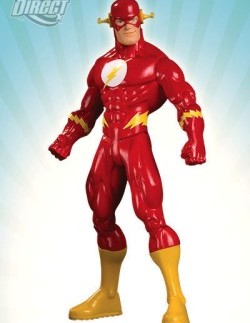 Some of the most requested DC Direct action figures - Wonder Woman, Batman, Superman and our favourite in this particular series of figures - The Flash - are back by popular demand! These classic interpretations of some of the core Justice League characters are based on the artwork of Ed McGuinness in the JLA: Classified anthology series and have been revamped and reactivated with enhanced, revised colors. McGuinness is known as the "Ed" half of the comic book art team EdEx (with inker Dexter … END_OF_DOCUMENT_TOKEN_TO_BE_REPLACED

DC Direct Watchmen Movie Dr Manhattan 1/6 Scale Figure If the talk boards on IMDB are anything to go by, excitement continues to build as the release date for Watchmen approaches. Directed by Zack Snyder of 300 fame it's due to hit theatres all over the world in March 2009. Based on the original twelve-issue comic book limited series published by DC Comics and created by Alan Moore, Dave Gibbons and John Higgins. Their mission is to watch over humanity ...but who is watching the Watchmen? DC … END_OF_DOCUMENT_TOKEN_TO_BE_REPLACED