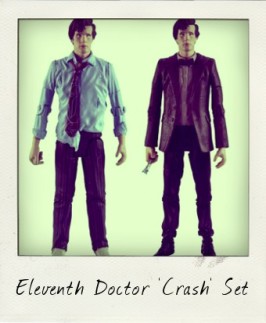 After the runaway success of the first wave of Matt Smith action figures in the role of the Eleventh Doctor, this week two more figures have been released to coincide with the brand new series of Doctor Who which recently aired for lucky viewers of BBC One with an opening episode entitled The Eleventh Hour. The Eleventh Doctor's 'Crash' Set, in fact, includes not one, but two incredibly detailed Matt Smith 5-inch action figures: … END_OF_DOCUMENT_TOKEN_TO_BE_REPLACED 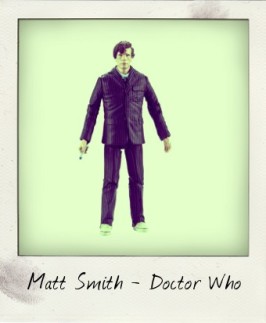 Doctor Who fans have been speculating over when the very first Matt Smith action figures would be released almost immediately after the news was announced that he would be stepping into David Tennant's hard-to-fill shoes and had won the coveted role of the Eleventh Doctor. Well, the wait is (almost) finally over and the very first Smith-era figure is available for pre-order. In fact, it comes as part of an entire set of 5 inch figures from the Tennant finale The End of Time which lucky … END_OF_DOCUMENT_TOKEN_TO_BE_REPLACED

UPDATE: January 11, 2010! The Matt Smith Doctor Who figures are finally here! Barely had the dust settled on the Beeb's announcent that Matt Smith will be the eleventh Doctor in its flagship show Doctor Who , when BBC Worldwide also confirmed that  Doctor Who will remain one of its priority licensing brands throughout 2009, Series 5 which will air in 2010, and beyond. Character, who hold the license to create Doctor Who action figures, will be developing Matt Smith items shortly, … END_OF_DOCUMENT_TOKEN_TO_BE_REPLACED