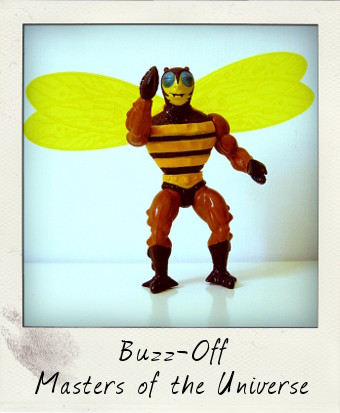 Ever since the news was first announced at the 2010 San Diego Comic Con earlier this year that Mattel would be issuing a Buzz-Off figure in December as part of its Masters of the Universe Classics toy line, the buzz (ahem!) about this figure got louder and louder! It became immediately clear from online forums that the humanoid bee from the race of Bee People was an immensely popular character from the original MOTU line, so with release of the new figure now imminent, let’s take a timely look back at the vintage version.

Luckily, back in 1984 our Heroic Spy in the Sky was known as simply Buzz-Off – the latest Mattel back story has revealed that his real name is actually “Tzzzzt zzz zzTTTzz”, thus scooping the prize for silliest MOTU character name so far, after scoring high points in the difficult to remember, spell and pronounce categories!

For those of you not versed in Masters of the Universe lore, Buzz-Off is one of the good guys. I remember as a child learning the very simplistic rule that bees were good and should never be harmed, whilst wasps, on the other hand, were pesky creatures to be avoided (but I digress…).

Buzz-Off was one of He-Man’s sidekicks, came with a handy pair of insect visors attached to a helmet – safety first, kids! – which gave him insect vision and allowed him to spy from the sky when flying. In case of danger he was also supplied with an axe. Sadly, my Buzz-Off has lost his helmet and axe accessories, although he still has his translucent yellow wings with their detailed vein patterning. His wings, in fact, are one of the coolest things about this figure and can be spread wide as if in-flight, or tucked behind him. The paintwork is excellent on this action figure, his limbs are tights and he’ll still land a powerful punch if his waist is twisted and released! All in all, a great vintage find!