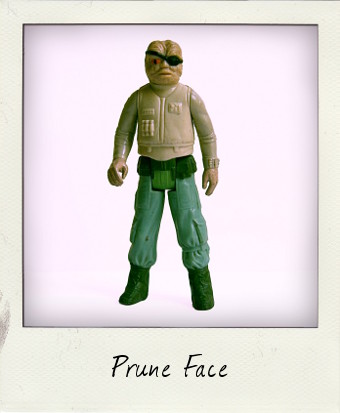 Many of the minor characters in the original Star Wars trilogy suddenly found themselves labelled with brand new politically-correct fancy names in the extended Star Wars Universe when complicated back stories were invented for even the smallest characters with only split-second screen time. Take good ole Prune Face here, for example, who we are now informed is a Dressellian resistance fighter from the planet Dressel whose real name is “Orrimaarko”. Still can’t place him? Next time you’re watching The Return of the Jedi if you look very carefully you’ll spot him sitting in the background amongst a couple of similarly wizened companions during the Rebel conference room scene. Just be careful not to blink…you may miss him! 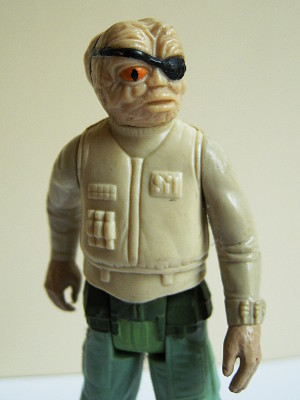 What do you mean you don’t remember me?

Prune Face may be a minor player, but surely one of the secrets behind Kenner’s enormous success with their 3 ¾ inch Star Wars action figure line was the attention to detail they lavished on all the figures in the range – kids were able to build entire armies of movie-accurate aliens. No surprises as to why this chap acquired the “Prune Face” nickname – get the man some Nivea – and quick! I’m not certain whether his wrinkled face, eye patch and one good orange eye with its reptilian slit iris made him much of a hit with kids back in the day, but his popularity shows no signs of flagging with modern collectors.

First issued on a Return Of The Jedi 77-back card (and on 65-back cards in Canada) Prune Face is also still readily found as a bagged figure, a sub-niche known amongst collectors nowadays as “Kenner baggies”. He was never actually featured as a mail-away figure promotion on any of the card fronts so it is likely that Prune Face baggies are the result of Kenner bagging their factory overstock in this way. He is date-stamped © L.F.L.1984 with the information downwards on a single line on the back of his left thigh. There is no country of origin indicated.

My loose figure is sadly missing his tan hooded cloak accessory and the least sci-fi looking weapon of any of the figures – a rather conventional brown rifle, but he is still an excellent addition to my Star Wars collection. Who better to kick off a new year of vintage action figure blogging?!