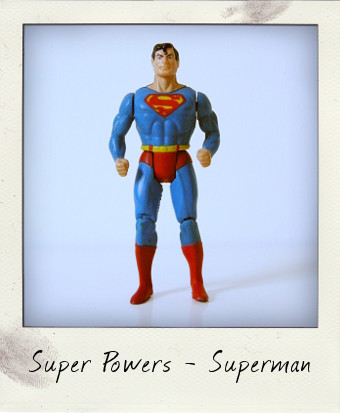 Whilst the star of the last post Captain America may have been top dog over at Marvel with the Mattel Secret Wars action figures, DC Comics had their very own leader of the Kenner Super Powers line – none other than The Man of Steel himself, Superman!

It’s a testament to the sheer quality of these Kenner figures, that nearly thirty years later you’ll most likely find that the “super power” action feature of any vintage figure you happen to come across is still working just fine. This Superman may have lost his cape, but he still has his “super action punch” if you squeeze his legs together – Ka-pow!

Superman was given star treatment in the Super Powers line as a whole, with not one, but two baddies to fend off – Lex Luthor appeared in the first wave of figures, with Brainiac joining him in the second – not to mention his very own vehicle which would shield him from Kryptonite called the Supermobile. It’s a bird!… it’s a plane!…it’s a car!…maybe?!… your guess is as good as mine! 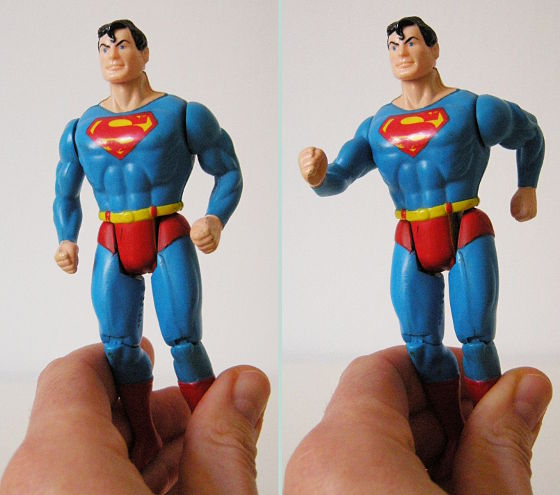 Squeeze Superman's legs together and he'll land a power punch!

Created by Kenner in the first wave of their Super Powers line in 1984, this 4 ½ inch figure really has a perfect Superman body sculpt and the piercing blue eyes and kiss curl are spot on – this really is a classic. Whilst the Superman logo decal on my figure is a little worn, the rest of the figure is in great shape and he still lands quite a punch!