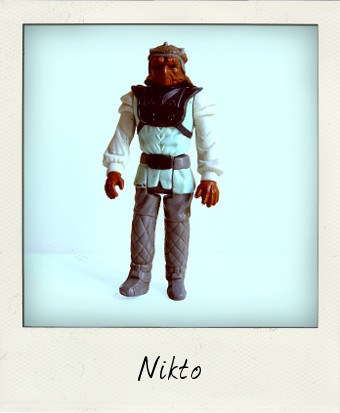 One of the things that has made Kenner‘s ground breaking 3 ¾ inch Star Wars action figures so popular with fans of both the original movie trilogy and also vintage action figure collectors today is the company’s unstinting attention to detail even with the most minor of characters in the Star Wars universe, some with the merest blink-and-you’ll-miss-it split second of screen time!

Nikto here, who was first released just in time for Christmas 1983 as part of the Sears Exclusive Jabba the Hutt Dungeon playset alongside Klaatu and 8D8, returning later the following year as a Return of the Jedi carded figure, is one such character. 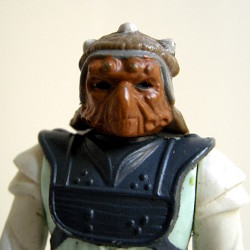 He’s a beautifully sculpted figure with lots of detail and he looks amazingly like his on-screen self – it’s just unlikely that anybody but the most fanatical die-hard fan has the faintest idea who he actually is! Don’t be confused by the Jabba the Hutt dungeon playset – he actually appears as an unnamed Skiff Guard during the Sarlacc Pit Battle in Return of the Jedi. His gnarled face, leathery skin, straps and protective body armour and headgear are all extremely accurate – the only things missing are the yellow stripes on the original movie Nikto’s leggings, which is a great pity as the raised stripes have been molded ready to be painted. (Read more about the Red Nikto’s screen time here.) 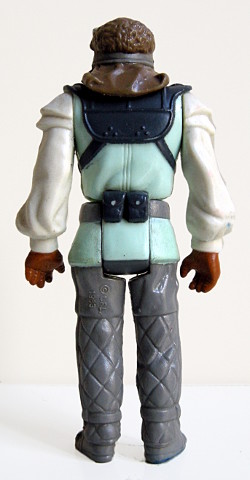 My Nikto is in great condition with hardly any paint wear and stiff limbs, although he’s sadly missing his battle staff weapon. There’s no country of origin stamped anywhere on the figure, whilst the copyright information – © L.F.L.1983 – runs downwards on two lines on the back of the left thigh.

Fun fact: The name “Nikto” was a tribute to the cult science fiction film The Day the Earth Stood Still and the famous phrase “Klaatu barada nikto” – the names “Klaatu” and “Barada” are also used for minor alien characters in Return of the Jedi!