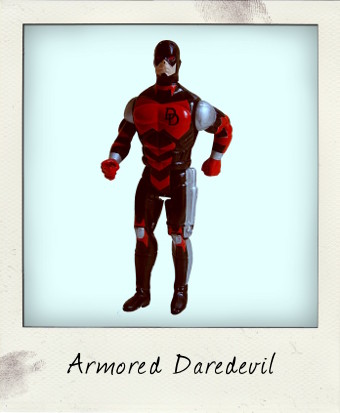 In 1993 Marvel Comics decided to revamp Daredevil‘s costume and kit out Matt Murdock in a snazzy new armored costume in the “Fall From Grace” storyline. This wasn’t such a bad idea in theory – Daredevil may be the “Man Without Fear”, but surely a little protective gear isn’t cheating – nobody thinks any less of Batman because he wears a Batsuit after all! Daredevil fans loved the old look, however, and by October 1995 he was pictured on the cover of issue #345 back in his red leotard and holding the tattered remains of the armored costume. 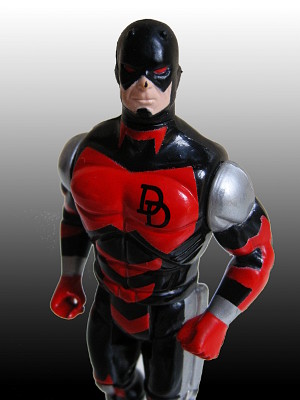 The armored costume story arc may have been short lived, but Toy Biz were quick off the mark in 1994 and produced this Armored Daredevil as part of its Marvel Super Heroes line. In fact, he is quite simply a repainted version of an identical sculpt released in 1990 – seen up close it’s clear that the black and silver areas have been sprayed over stencils, with the paint thick enough to leave a slightly raised edge, and that the red colour from the original figure has been left exposed for the go faster stripes and chest area. I do love how cool his “D D” logo looks on this costume! 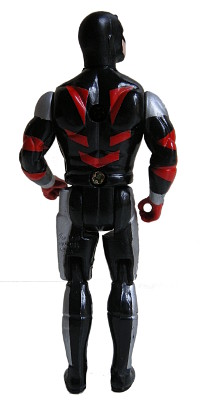 Interestingly, Toy Biz didn’t even bother to change the image of Daredevil on the packaging for this repaint. Carded versions of this armored figure show him sitting in a blister alongside the red-suited version of our hero!

As with the other figures in the line this is a pretty basic figure measuring just shy of 5 inches in height, built with only seven simple points of articulation at the neck, shoulders, hips and knees only. His right hand is sculpted ready to hold his accessory – an “Exploding Grapple Hook” – which this loose figure is sadly missing. This gadget would allow kids to swing their Daredevil figure from a length of twine attached to the hook – clearly this is how my Daredevil scraped the paint off his nose, in what is an otherwise perfect condition figure.

Love him or hate him, Armored Daredevil is a must-have vintage action figure in any Daredevil collection!