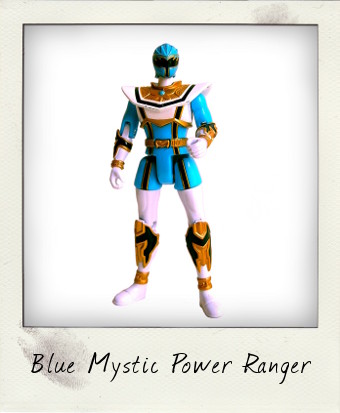 TV shows from the Power Rangers franchise are popular the world over. Certainly, they often seem to turn up on thrift stalls or markets here in Rome, Italy where I live. I don’t buy many figures issued this side of the millennium, although if I find a figure with a particularly interesting feature I’ll occasionally break my own rule. After all, today’s figures are tomorrow’s vintage! And this Mystic Force action figure grabbed my attention even before I’d set eyes on it. Rummaging in the bottom of a bargain bin I heard the special – and extremely LOUD – sound effects gimmick long before I managed to find it. Even when I held the figure in my hands I kept inadvertently setting off the “Mystic Sound” by pressing a button on her belt. I took way too long to work that one out! 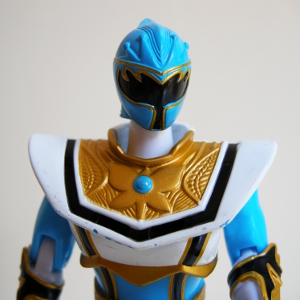 Issued in 2006 by Bandai as merchandising for the Power Rangers Mystic Force, the fourteenth season of the Power Rangers TV series, the American version of the original long-running Japanese tokusatsu show, Super Sentai, this 5 ¾ inch figure was part of a series which included all five rangers with various sound effects, and even phrases. Glow in the dark weapons were included in the pack and an extremely cool interchangeable head featuring our Blue Ranger here in civilian mode as Maddison “Maddie” Rocca, bearing a reasonable likeness of actress Melanie Vallejo.

The articulation is pretty good with 11 points at the neck, shoulders, elbows, hips and knees, with two nicely disguised split joints at the top of the thighs where the legs meet her “skirt”, and the figure poses well. The detailing on the costume is also very good. The figures in this series are wearing their Legend Armor (which gave them increased magical powers, as well as souped-up battle armor in the TV show), and the details are very accurate. The Mystic Lion Staff is the weapon the rangers gain when they are in their Legend Warrior mode, and each figure was issued with a Lion Staff as well as another more generic weapon. Typical teenagers, when not using the lion staff their primary accessories are, of course, their cell phones!

What is most strange about this figure is the sound effect itself. For some reason the Blue Ranger was loaded with the Solar Streak Megazord sound effect, rather than her own sound. All in all though, a must-have addition to any Power Rangers action figure collection!