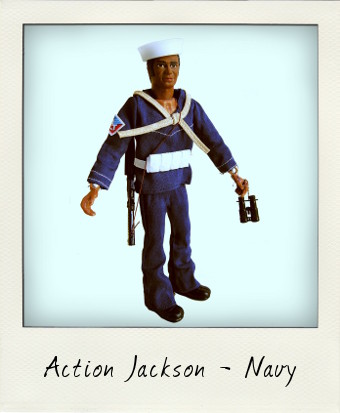 Whilst it was Hasbro who first coined the phrase “action figures” for military dolls aimed at the boys’ market in the late 1960s with their G.I. Joe line, and in particular Palitoy’s UK version known as “Action Man”, the legendary Mego company also earned a place in action figure history in the early 1970s with their own short-lived adventure hero line – Action Jackson. Selling well only briefly, and ultimately a commercial failure, these 8 inch figures with a wonderful range of costumes, were soon superseded by Mego’s phenomenally successful World’s Greatest Superheroes figures. I personally love Action Jackson, however, and he remains a firm favourite with vintage Mego collectors to this day. 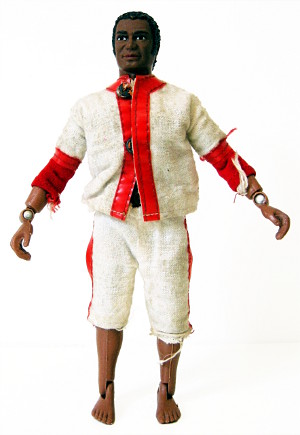 There were three basic models in the Action Jackson range – two white figures (one bearded and one clean-shaven) and one clean-shaven black figure – issued in a range of simple pale and dark blue boilersuits with dog tags. There was also a plethora of boxed and carded outfits ranging from the military – army, navy, air force – to sports as varied as karate, tennis and rugby. There were costumes for every possible scrape a child could invent for this figure – frogman, ski-patrol, or a jungle safari! These costumes are still pretty easy to find carded or boxed today if you feel like swapping the outfit on your figure, which is exactly what I did with my Action Jackson here. I found my loose figure wearing the tattered rags of a baseball costume – extremely grubby and minus shoes, socks and hat, he looked in a sorry state. It gave me an enormous thrill to OPEN an original sealed boxed Navy costume pack and dress him in a brand new outfit! That’s right folks, a took a vintage collectible out of the box…and the world is still turning! Open the box – play with the toys! He is now resplendent in navy blue shirt with white (now rather beige) trim and trousers, a white plastic hat, binoculars, M-16 rifle, black boots, and a white belt with pouches and buckle. 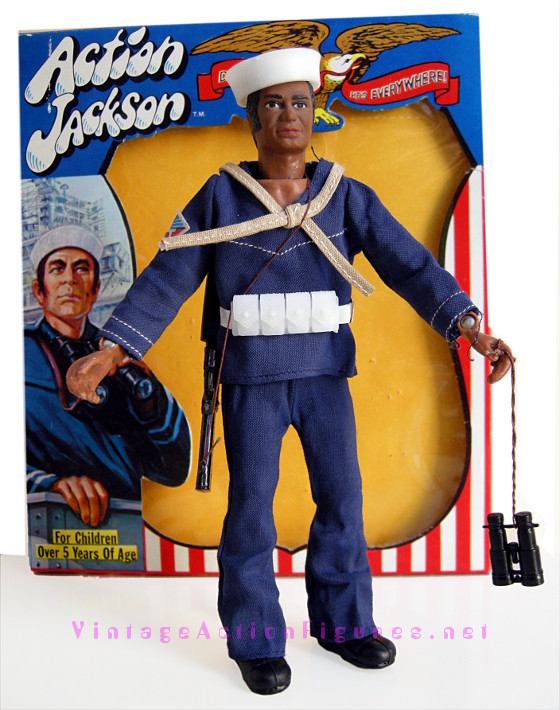 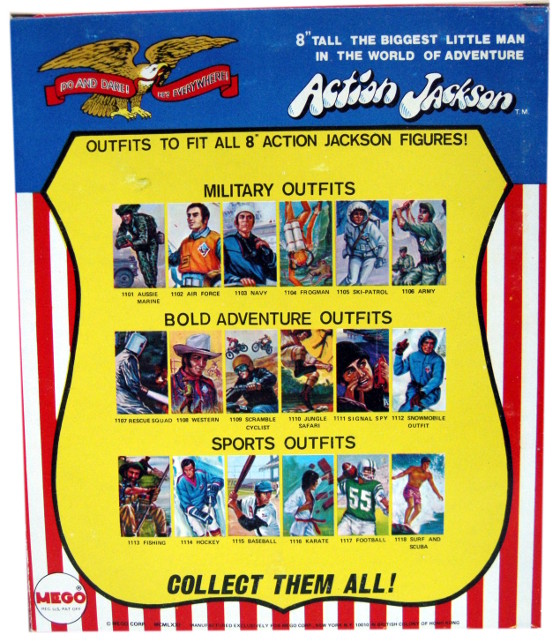 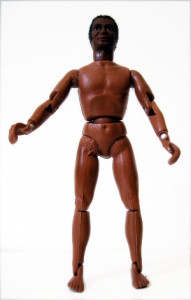 This Action Jackson was found in Italy so it is most likely the Italian version distributed by Baravelli known as L’Amico Jackson (Friend Jackson) in Italy. The black figure is the rarest of the three and Italy is the only other country to have released him outside of the United States. The body has metal pins at the elbow, wrist, knee and ankle joints typical of the skinny Type 1 Mego bodies, and he is strung together with elastic via the ball joints at the shoulders, waist, and hips. In fact, my figure appears to have been restrung with new elastic which is slightly too thick causing his arms to splay out slightly. Indeed, these figures are held together by that connecting elastic – restringing them is an easy enough job, but one I will most probably postpone until his present string actually breaks! The later Type 2 bodies were beefier in the sculpt and more detailed – I was amused to see that a belly button has been included, however sketchy the rest of the sculpt may be! With additional movement at the neck making a grand total of fourteen points of articulation, this vintage figure from 1971 was certainly ready for action!