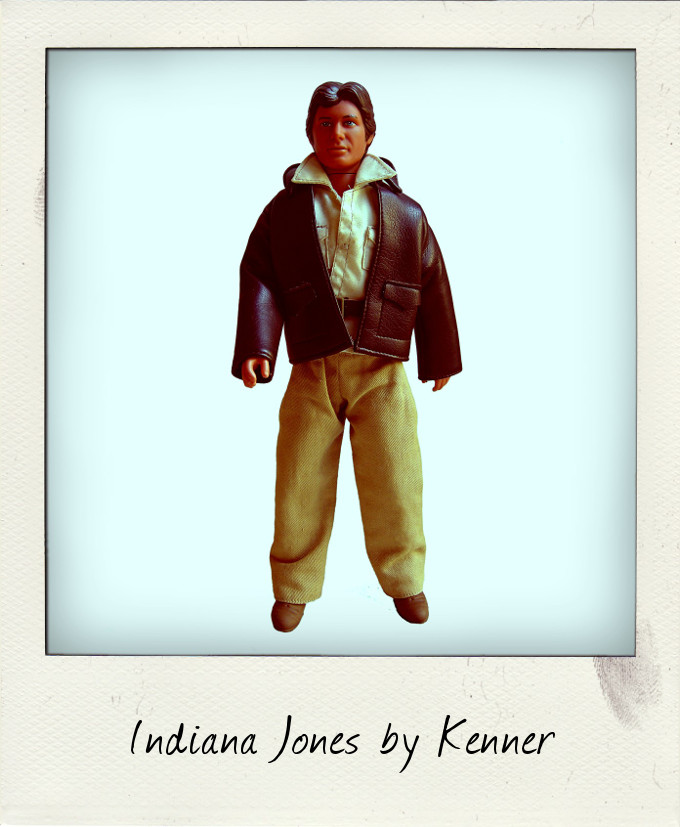 Harrison Ford seems to have an incredible knack for being cast in cult classics – his portrayal of Rick Deckard in Blade Runner alone would have been enough to ensure him enduring cult status. Most recently, of course, the entire planet has been focussed on his reprisal of the role of Han Solo in JJ Abram’s billion-dollar-grossing sequel to the original Star Wars trilogy – Star Wars: The Force Awakens – an appearance which saw him reclaim his crown as Hollywood’s highest earning actor. Personally, I’ve got a soft spot for yet another much beloved embodiment of a different George Lucas creation – Indiana Jones – so when I spotted this vintage 1981 Kenner 12 inch Raiders of the Lost Ark action figure at a toy fair recently, I just had to add it to my collection!

“Recreate the exciting Indiana Jones exploits! Ready for action with pistol and bullwhip!”

That’s what it said on the original packaging, but sadly my loose Indy figure has mislaid his weapons and holster, and most regrettably of all, his iconic fedora hat. If truth be told, however, the original vintage hat accessory is a rather ugly, woolly affair and the strangest fedora you’ll ever see! Where the fedora does come in handy, though, is as a way of disguising the fact that this Indiana Jones figure is actually nothing more than a recyled Han Solo figure. Kenner took the same figure sculpt – including Han Solo’s 1970s longish hair and sideburns – and simply dressed him in Indiana Jones gear. One odd distinction was made in the paint work on the face: the Indiana Jones figure has blue eyes, while the Han Solo figure has brown eyes. (Note for fact fans: Ford’s eyes would appear to be hazel, although the late River Phoenix, who played the young Indy in the Last Crusade movie, had blue eyes.)

My Indiana Jones is still a well dressed figure and has his original jacket, shirt, trousers, belt and boots, with each item made out of an impressive range of different materials. The jacket is particularly good faux-leather. And whether this head is on a Han or Indy body, Kenner did a fine job with the Harrison Ford likeness here. All the clothing is removable, opening a potential “is it a doll?” debate, although the only real reason for removing any items I can find is to double check the copyright information and country of original written over three lines at the base of the spine.

The body itself is rather limited in articulation with only seven points in total – simple swivel joints are located at the neck, shoulders and hips, with hidden hinged joints that bend under a rubbery “skin” at the knees. The elbows don’t bend – so don’t try that at home folks, you’ll risk breaking his arms! There’s still plenty enough articulation to display this awesome collectible.

A wonderful vintage find and an absolute must-have for any Indiana Jones collector.