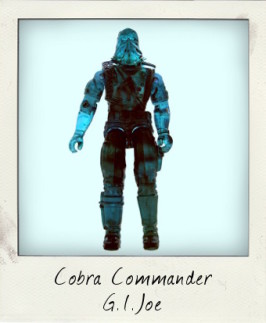 Ever since picking up a translucent vintage TRON Warrior action figure earlier this year I've been keeping my eyes peeled for more figures from the series whenever I rummage through bargain bins of loose figures at flea markets. When I spotted this 3 ¾ inch fella cast in blue translucent plastic, for a joyous split second I thought I'd found a TRON Flynn figure, only to quickly realise my mistake once I held the figure in my hands. No matter - it was clear that what I'd found instead was a cool … END_OF_DOCUMENT_TOKEN_TO_BE_REPLACED 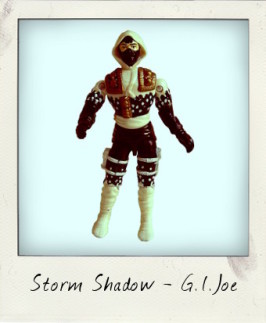 Hands down one of the best things about the immensely popular 3 ¾ inch G.I. Joe: A Real American Hero line has to be that Hasbro invented a satisfying back story which included a fantastic range of villainous bad guys for the G.I. Joe Team to fight in the shape of the Cobra Command. Storm Shadow aka Thomas S. Arashikage here, however, is one of only a few characters whose allegiance has shifted back and forth over the years and who has been issued as both a member of team Cobra and a member … END_OF_DOCUMENT_TOKEN_TO_BE_REPLACED 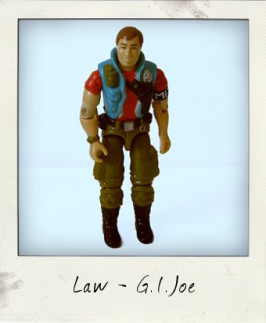 After unleashing Dreadnok uber-villain Zanzibar from Hasbro's G.I. Joe: A Real American Hero line a couple of weeks ago, let's redress the balance by taking a look at one of the G.I. Joe Team good guys - the Military Policeman known as “Law”. First released as part of the sixth series in 1987 Law was one half of the team “Law & Order”, with his sidekick being a mean-looking Alsatian K-9 police dog – code name “Order”. As his original G.I. Joe filecard warns: You don't want to mess with … END_OF_DOCUMENT_TOKEN_TO_BE_REPLACED 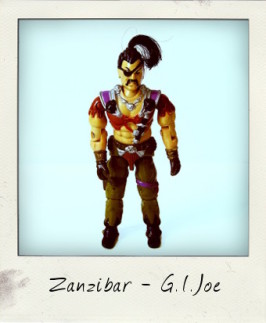 Every toyline of action figure heroes needs bad guys to fight against and the G.I. Joe Team had the Cobra Command. A dastardly bunch, they hired the even meaner Dreadnoks as mercenaries to do their dirty work, and as action figure villains go, they just don't get nastier than Dreadnok member Zanzibar. First released as part of the sixth series of Hasbro's hugely popular G.I. Joe: A Real American Hero toyline in 1987, he was packaged exclusively as the pilot of the Dreadnok Air Skiff toy and was … END_OF_DOCUMENT_TOKEN_TO_BE_REPLACED 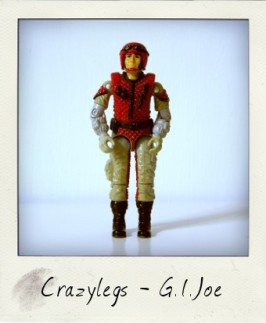 Whilst many vintage G.I. Joe action figure collectors concentrate on the original 12 inch figures, there are also armies of equally passionate fans of the 3 ¾ inch G.I.Joe figures which first hit the toy market in 1982. The smaller, relaunched figures were issued with all sorts of gadgets and even a back-story involving the never-ending fight between the G.I. Joe Team (the good guys, obviously) and the Cobra Command (the bad guys). Hasbro eventually developed these figures into the G.I. Joe: A … END_OF_DOCUMENT_TOKEN_TO_BE_REPLACED 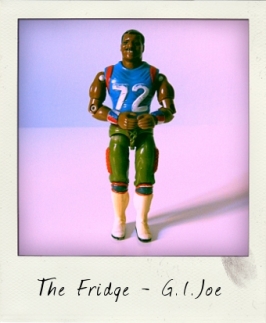 As I live in Rome, Italy I couldn't have been more surprised to find this action figure of American pro football player William Perry aka The Refrigerator the other day.  He was right at the bottom of a bargain toy bin in a local second-hand store...but I knew I just had to add him to my collection! The figure has clearly seen some heavy play fighting the evil Cobra baddies, so there is some wear to the number 72 blazoned across his Chicago Bears shirt and the G.I. Joe transfer on his belt … END_OF_DOCUMENT_TOKEN_TO_BE_REPLACED