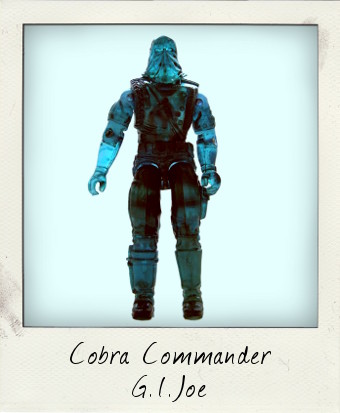 Ever since picking up a translucent vintage TRON Warrior action figure earlier this year I’ve been keeping my eyes peeled for more figures from the series whenever I rummage through bargain bins of loose figures at flea markets. When I spotted this 3 ¾ inch fella cast in blue translucent plastic, for a joyous split second I thought I’d found a TRON Flynn figure, only to quickly realise my mistake once I held the figure in my hands. No matter – it was clear that what I’d found instead was a cool figure from the legendary Hasbro G. I. Joe: A Real American Hero line. But who was he? The hooded face and details on his torso made the Cobra Commander a likely candidate, but which version?

There are some amazing online resources for identifying loose G.I.Joe figures such as YoJoe.com – but this figure still had me stumped. He is date stamped 1991 on his inner left thigh, yet there seemed to be no matching 1991 or 1992 figures for this figure – I began to seriously wonder if I’d found a bootleg! Luckily the good folks over at Toy Bloggers United on Facebook were able to help me with what turned out to be a completely official G.I.Joe figure – huge thanks go to Wes Grogan! Issued in 2005 as an online exclusive this translucent “hologram transmission” version of the supreme leader of the Cobra Command and arch nemesis of the G.I. Joe Team was originally packaged in a special 3 figure pack together with Agent Scarlett and Alvin “Breaker” Kibbey, and a reprint of issue #9 of the Marvel G.I. Joe classic comic. Part of the twenty first series of figures, this is, in fact, Version 23 of the Cobra Commander – as of today, there have now been 51 different versions in total! 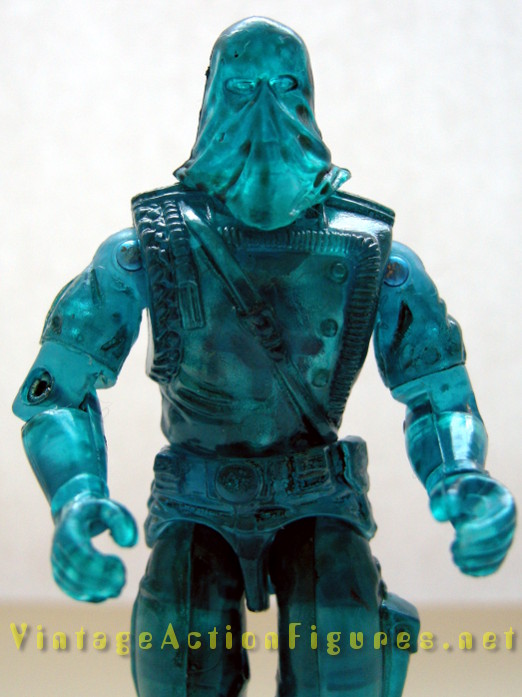 As is common in this action figure line, the figure was created by recycling earlier versions of the figure – the chest, waist, legs, and upper arms were originally used to construct Cobra Commander Version 5 – hence the confusing copyright information on the thigh, whilst the head is from Version 18.  And, to add a touch of Frankenstein, the lower arms have been borrowed from a completely different figure all together – the 1984 version of Roadblock! (Thanks to YoJoe.com for their exhaustive information on the history of this figure once I knew where to look!) My loose figure has lost his black gun, but he displays just fine without this rather pedestrian solid plastic accessory. He’s also packed chock full of articulation with 12 points in total – the split joints just above the elbows are a great addition.

For the sheer novelty factor alone this figure is a must have item in any G.I.Joe collection! I love it!