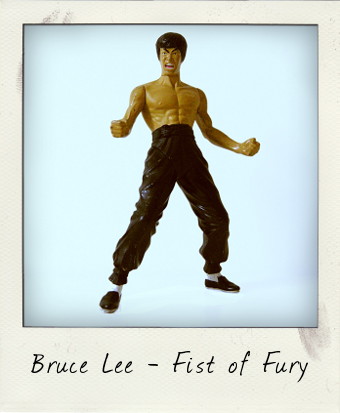 On this day back in 1973 Bruce Lee, the greatest martial arts icon of them all, died at the shockingly young age of 32. Tragically, after a string of Hong Kong movies – Lo Wei’s The Big Boss in 1971, my personal favourite, Fist of Fury the following year, and his self-written and directed Way of the Dragon (also 1972) – at the time of his death he was on the edge of finally enjoying global super-stardom with the Warner Brothers’ produced Enter the Dragon, the last movie he would complete in his lifetime.

I picked up this 6 inch Bruce Lee action figure in a bargain bucket many years ago. He was in a terrible state – extremely grubby and a little sticky to touch – but I’m such a huge Lee fan that I couldn’t resist buying him all the same. You can check out the clean-up operation on this figure in my Squidoo guide: How to clean vintage action figures. 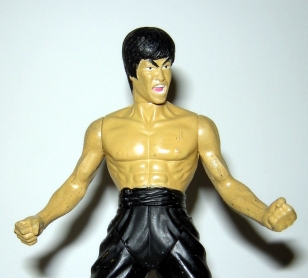 Issued by Long Goal Enterprises in 1998, with a massive five lines of licensing and copyright information stamped right across his back reading “Fist of Fury Licensed by Media Asia Consumer Products Ltd © STAR TV All Rights Reserved”, this action figure has only limited points of articulation at the neck, shoulders, waist and hips, and is essentially a static display piece, yet it really captures the sheer dynamic energy of Bruce Lee. Originally packaged with a display stand and six mini film posters, the figure sold out quickly at the time, alongside the second figure in the series of two, which featured him in his iconic yellow jumpsuit from Game of Death (his last film left incompleted when he died).

The likeness to Bruce Lee is excellent and the pose perfectly captures him in a clenched-fist Fist of Fury pose. I love the open mouth on this figure too as if he is emitting one of his trademark shrieks! 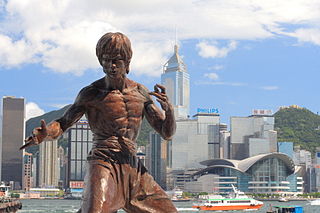 Interestingly, the larger than lifesize Bruce Lee memorial bronze statue in Hong Kong near the waterfront at Tsim Sha Tsui, also features him in a similar bare-chested strike pose from Fist of Fury.