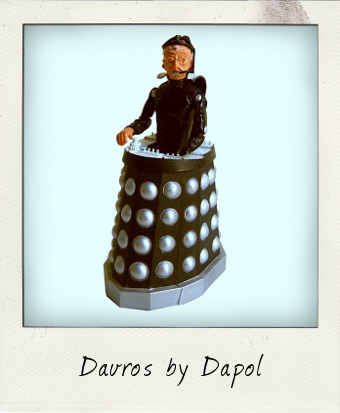 I am back in Rome after a relaxing summer break visiting family and friends in the UK, so thought I’d kick off a new season of blog posts with a distinctly British vintage figure. My August trip happened to coincide with some major geek news from Blighty: the BBC finally revealed that Scottish actor Peter Capaldi will take on the coveted role of The Doctor in its legendary sci-fi TV series Doctor Who, when current Doctor Matt Smith hangs up his bow tie later this year. It’s a big year for the show, with a 50th anniversary special set for global transmission on 23 November 2013, which will feature, amongst other characters, a return of the Doctor’s archnemeses, the Daleks.

As Whovians will know, the Dalek race – the brainchild of science fiction writer Terry Nation – are extraterrestrial mutant cyborgs, deprived of every emotion but hatred, who tirelessly seek domination of the universe, and have terrified younger viewers for decades with their famous catchphrase “Exterminate! Exterminate!” I visited the wonderful Doctor Who Experience in Cardiff Bay last year and confess that even today, coming face to face with a Dalek and hearing that metallic-voiced order to exterminate, set my heart racing! The Daleks were created by the crazed scientist Davros. He first appeared in Genesis of the Daleks, a classic Tom Baker Doctor Who series from 1975, and like his Daleks also gives me the heebeegeebees to this very day!

This original Davros, as played by Michael Wisher, was the model for the Dapol action figure issued in 1989 as part of the second wave of their Doctor Who figures. The 4 ½ figure is on wheels with a cool friction drive mechanism – pull him back and he’ll roll forward – and there are an additional six points of articulation, with ball joints at the shoulders, hinged elbows, a slight swivel at the waist, whilst the head can complete a full 360° turn.

The figure is a real stunner in terms of likeness – his wrinkled face, closed eye sockets, third blue cybernetic eye mounted on his forehead, and his head gear paraphernalia, are spot on, with some nice colour details. The paintwork is rather thick and “blobby”, but this works rather well for Davros’ face! Surprisingly the very first edition messed up big time on one particular detail – he was issued with two hands! Initially, the arm problem was remedied by simply slicing off his left hand. A later figure would see a properly molded stump, although my version is the earlier, sharp-edged amputated version. In no way does this detract from the overall quality of this figure, though – I absolutely love it!

A must have collectible for any Doctor Who fan…am delighted with my vintage find!