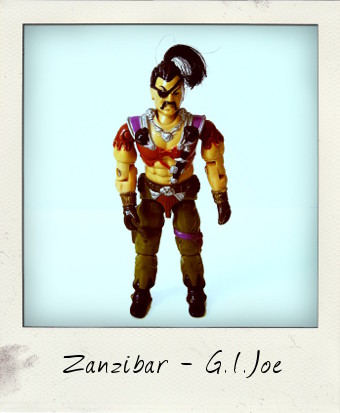 Every toyline of action figure heroes needs bad guys to fight against and the G.I. Joe Team had the Cobra Command. A dastardly bunch, they hired the even meaner Dreadnoks as mercenaries to do their dirty work, and as action figure villains go, they just don’t get nastier than Dreadnok member Zanzibar. First released as part of the sixth series of Hasbro‘s hugely popular G.I. Joe: A Real American Hero toyline in 1987, he was packaged exclusively as the pilot of the Dreadnok Air Skiff toy and was issued with three useful accessories – a handgun, hammer and spear. According to his G.I.Joe file card this guy was “so nasty that the other Dreadnoks hate his guts!” 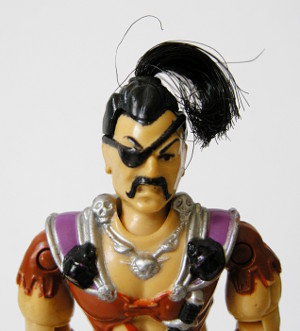 As with all the figures in this line, Hasbro succeeded in packing in a lot of detail in 3 ¾ inches. With his Freddie Mercury moustache, eye patch, wristbands and torn shirt, this figure looks the archetypal pirate, with his crowning glory of course, an utterly cool black pony tail made of “real” hair. (Incidentally, fact fans, Freddie Mercury was born in Zanzibar – spooky coincidence or what?)

Zanzibar aka Morgan Teach, like all of the post 1985 G.I. Joe figures is also extra articulated – his neck is ball jointed allowing him to look up and down. This figure is still in great shape, with hardly any paint wear, and the internal o-ring connecting the joints has either been replaced or the original is still nice and tight, as he’s still able to stand on his own two feet unaided. A great vintage find!