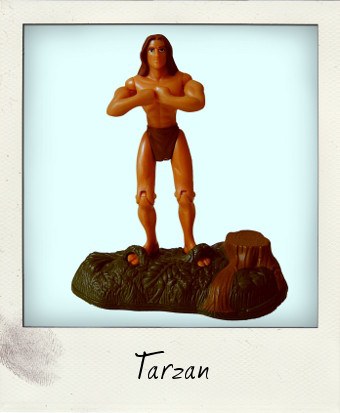 I’ve been a vegetarian for almost all of my adult life so it’s been quite some years since I’ve eaten a burger or stepped inside a McDonald’s restaurant, and as a result have never really been a collector of the ever popular McDonald’s Happy Meal toys and action figures. They do seem to turn up in bargain bins and on market stalls pretty regularly, however, and I inevitably find them hard to resist!

A stroke of marketing genius, Happy Meal toys have been getting kids to drag their parents into the fast food chain for decades, with Disney heavily involved with the company as a means to promote its latest films during the 1990s, until they abruptly ended that relationship in 2007. 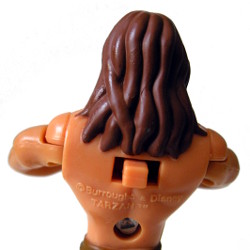 Tarzan - chest thumpung switch on back

Rumour has it that Disney preferred to associate their image with healthier foods – after all, giving away toys with fast food is probably not terribly helpful in the battle against childhood obesity. On the other hand, our lean, mean Tarzan here, is hardly a poster boy for Super Size Me either! I’m pretty sure he’s never even seen a plate of fries!

Issued in 1999 as part of the campaign to promote Disney’s blockbuster Tarzan – one of the last truly successful “traditional” animated movies to come out of the studio before its marriage with Pixar – this 4 ¾ inch Tarzan figure was created as part of the European McDonald’s Happy Meal campaign and is actually lots of fun for a free gimmick. First of all, he looks great – the sculpt is excellent and very like Disney’s angular-faced version of Edgar Rice Burroughs’ hero. Best of all, though, are the interactive aspects of the figure – not only does he beat his chest in true Tarzan of the Apes style via a switch in his back, but he also surfs! Slot his feet into the log accessory, wind up the friction motor and watch him go zipping across (and off) your desk! 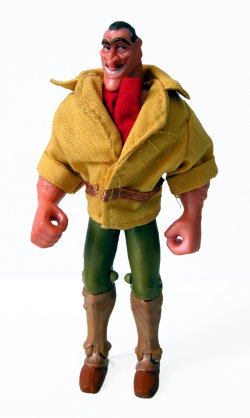 The other figures in this series comprised Jane; Tarzan’s adoptive ape mother Kala, with a baby version of Tarzan; Tantor the elephant; Tarzan’s friend Terk the gorilla; Professor Porter (Jane’s father); Kerchak climbing a tree; and the dastardly hunter and tracker Mr. Clayton, the villain of Tarzan.

I found this Clayton figure together with that of Tarzan and they make an excellent display pair. Again, it’s another spot-on movie likeness capturing his smarmy expression perfectly, and whilst there are no interactive features, he is built with an impressive ten points of articulation and even comes with a cloth jacket, complete with red neckerchief and Velcro fastening – not bad for a fast food toy!