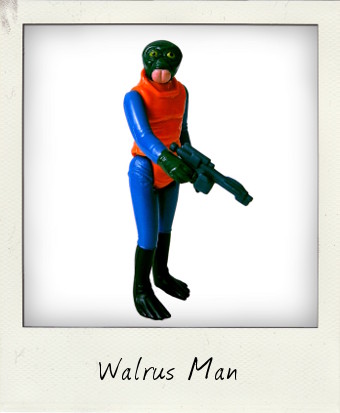 Whilst almost all of Kenner’s 3 ¾ inch Star Wars action figures were pretty accurate movie-likenesses by the standards of the day, Walrus Man here – later revealed as being called Ponda Baba when secondary characters were issued with colorful back stories too – stands out from the crowd as being one of the least like his movie counterpart.

Walrus Man’s screen time may be brief, but it is certainly a memorable moment when Obi-Wan Kenobi slices off his arm with his light saber during the famous cantina scene. As the camera lingers over the bleeding limb just about everybody, with the exception of Kenner’s toy designers, must surely have noticed that he wasn’t wearing an orange tank top over a blue body suit! Clearly, huge artistic license was taken with this figure – I’ll concede that webbed feet, however inaccurate, do make sense for a Walrus-faced guy, but why is he bright green? 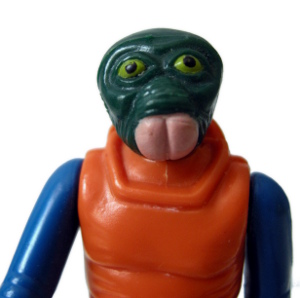 First appearing as part of the motley crew consisting of Hammerhead, Greedo and Snaggletooth in the exclusive Sears 4 pack Star Wars Cantina Adventure Set, which was released just before Christmas in 1978, Walrus Man was also issued carded for all three original trilogy movies Star Wars, The Empire Strikes Back, and Return Of The Jedi.

Walrus Man figures have one rather important variation in the color of his tusks, which were available in either pink or white versions – this is the pink variety. Issued with a common bad-guy weapon, a Stormtrooper Blaster accessory, my vintage action figure is complete and in great condition, with hardly any paint wear or scratches to the tusks. 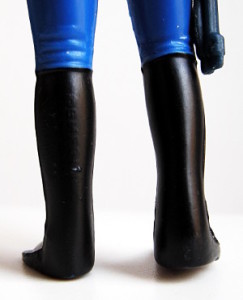 This particular figure carries no country of origin (COO), and has instead a faint scar on the back of the lower left leg where the copyright information – GMFGI (General Mills Fun Group, Inc. ) – has been melted off, leaving a number “1” intact. I think this figure may have been distributed by PBP (Poch Borras Palouzie), a Spanish subsidiary of Kenner’s parent company General Mills, but I’m not entitely certain. Please feel free to leave any comments or suggestions below.