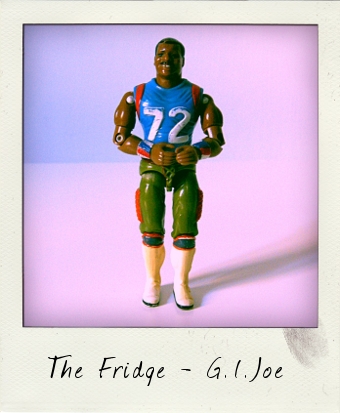 As I live in Rome, Italy I couldn’t have been more surprised to find this action figure of American pro football player William Perry aka The Refrigerator the other day.  He was right at the bottom of a bargain toy bin in a local second-hand store…but I knew I just had to add him to my collection! The figure has clearly seen some heavy play fighting the evil Cobra baddies, so there is some wear to the number 72 blazoned across his Chicago Bears shirt and the G.I. Joe transfer on his belt buckle is barely visible, but all in all he’s still in good shape. The paint work on the face is nice and clear and the all-important gap in Perry’s front teeth is still there!

Available as a mail order only G.I. Joe action figure as part of the 3 ¾ inch A Real American Hero line by Hasbro in 1987 – the advertising campaign began in 1986 although the date stamped on the figure is 1987 – the figure came originally with a black football accessory attached to a chain which doubled up as a somewhat bizarre weapon, as well as a special file card. In order to get your hands on the figure you were required to collect the coupons found in the packaging of other figures in the line and then call a special number.

And what on earth was William Perry doing in the G.I. Joe team in the first place? He was the Physical Training Instructor of course, although the sculpt they gave him is certainly a trimmer figure than the real Perry. Incidentally, he is only the second living person to be made into a G.I. Joe figure, the first being former pro wrestler Sgt. Slaughter.

Sadly William Perry now suffers from Guillain–Barré syndrome and has been in and out of hospital recently. We wish him well.