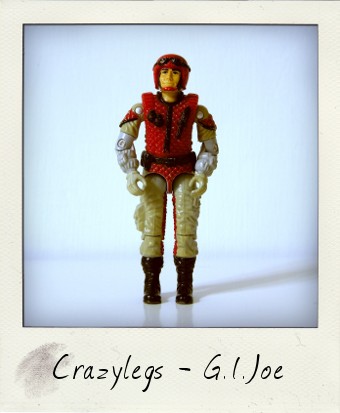 Whilst many vintage G.I. Joe action figure collectors concentrate on the original 12 inch figures, there are also armies of equally passionate fans of the 3 ¾ inch G.I.Joe figures which first hit the toy market in 1982. The smaller, relaunched figures were issued with all sorts of gadgets and even a back-story involving the never-ending fight between the G.I. Joe Team (the good guys, obviously) and the Cobra Command (the bad guys). Hasbro eventually developed these figures into the G.I. Joe: A Real American Hero line.

Love them or hate them, there’s no denying that these small figures packed loads of personality into each and every figure, and with impressively flexible multiple points of articulation, made great toys. In fact, it can be pretty tough finding vintage G.I Joe figures that haven’t seen very heavy play and limbs are often loose, paint chipped etc. G.I.Joe’s are reasonably unique, however, in that thanks to a screw buried deep in their backs, they can actually be taken apart and reassembled. Replacing an old o-ring is often all that’s need to tighten up loose joints.

This G.I.Joe Assault Trooper was first released as part of the sixth series in 1987 and like most of the figures in the line has a great name – “Crazylegs”! Whilst his limbs are all pretty tight and he’ll stand up fine unaided, his grey trousers have yellowed (another common problem with this line) and he is missing his original kit of a black rifle, a black stock and a tan parachute harness. Curiously, the Crazylegs figure was entirely re-used for a Toys R Us exclusive Night Force version in 1988 as part of the seventh series, issued in a two-pack with a variant of Outback. Production of Crazylegs was discontinued in 1989.