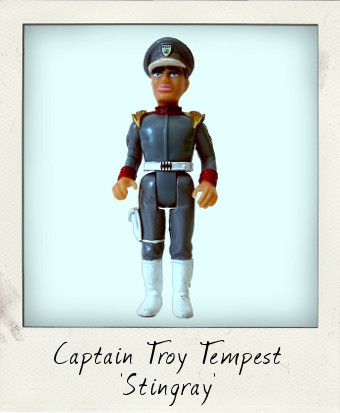 As promised in my last post, here’s another vintage action figure found at a flea market on my recent trip back to the UK, and like the Doctor Who collectible featured last time, this is a piece of UK television memorabilia from another cult show – Captain Troy Tempest, James Garner lookalike and the dashing hero of Gerry and Sylvia Anderson’s marionette masterpiece Stingray. The voice actors may have all been American – a ploy to ease overseas sales of the show – but the rest of the production was entirely British.

Set in the year 2065 at the headquarters of the World Aquanaut Security Patrol (WASP) in Marineville, the ‘Stingray’ of the title was actually a state of the art submarine piloted by none other than our Troy here. First transmitted on ITV way back in 1964 and 1965, it may be hard for the younger generation of kids who have known nothing but CGI, to really appreciate the impact of those shows. Those wobbly marionettes, operated using a puppetry technique known as Supermarionation, may have been parodied dozens of times since, but the sheer artistry of the production, action packed story lines – even a classic love triangle – together with impressive special effects, ensured that this was a kids show that adults loved too. 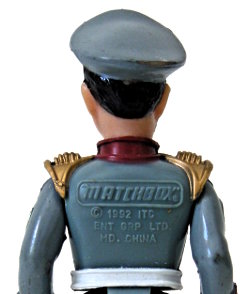 Curiously, Stingray was the first Supermarionation television series to be filmed in colour, but was transmitted in black and white in 1964, as colour TV didn’t start on the ITV channel until 1969! This wasn’t a problem for viewers in 1992, of course, when BBC2 subsequently repeated the series from new prints from the master negatives. So popular were these reruns that Matchbox toys produced a series of tie-in 3 ¾ inch action figures in the same year. Alongside Troy, there was also a Marineville Headquarters Play Set, as well as his undersea temptress Marina, colleague Commander Sam Shore, baddie Evil Lord Titan, not to mention a Terror Fish and the Stingray craft itself.

Given that these figures were issued in 1992, the articulation is a pretty limited 5 points at the usual neck, shoulders and hips, but this doesn’t seem to matter one bit with this line – in fact, it gives them a retro feel that is entirely suited to the original Stingray marionettes. My only gripe would be that the copyright information might have been a little more discreet – the Matchbox logo covers most of the back of the figure! Unfortunately, my Troy has mislaid his weapon, but he is nevertheless a great vintage find!

All together now… Marina… Aqua Marina!