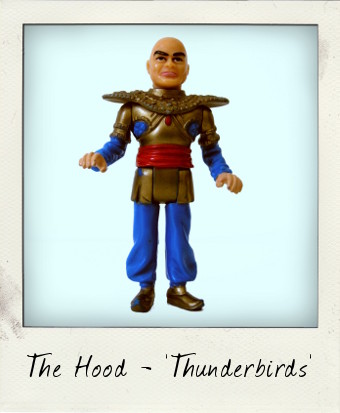 Every great cult television show – and naturally, tie-in toy line – needs a dastardly foe who will try his utmost to ruin the plans of the good guys and prevent the heroes of the show from stealing the limelight through their daring deeds. Last time we looked at Captain Troy Tempest, the handsome hero from Stingray, so I thought it might be fun to follow that up with a villain from another absolute classic Gerry and Sylvia Anderson marionette TV show – The Hood from Thunderbirds.

Thunderbirds, alongside the two feature length marionette movies Thunderbirds Are Go and Thunderbird 6, is quite possibly the most popular of all the Supermarionation shows, even inspiring a live action feature film in 2004. That most recent movie bombed at the box office, however, proving that maybe those 1960s puppet astronauts in the International Rescue team just couldn’t be bettered.

Set somewhere in the South Pacific on Tracy Island, the stars of the shows are the Tracy family – ex-astronaut Jeff Tracy, and his five sons – who zoom all over the world using their fleet of Thunderbird machines to save people from disasters mostly set in motion by The Hood, an evil baddie obsessed with stealing the top secret technology behind the Thunderbirds. Whilst it was never revealed in the TV show, issue 65 of “Thunderbirds – the Comic” announced that The Hood’s real name was Belah Gaat.

As with the Stingray series, this 3 ¾ inch action figure was produced by Matchbox toys in 1992 as tie-in merchandising when the BBC repeated Thunderbirds in the 1990s. Alongside all the main characters from the show, there was also an enormously popular Tracy Island Play Set. Once again the articulation is a pretty limited 5 points at the usual neck, shoulders and hips, but the paint work and molding detail is really rather good and an accurate representation of The Hood as he appeared on screen. The Hood is known as a master of disguise and appeared in various outfits in the show – clearly in this version he is passing himself off as Yul Brynner in The King and I!