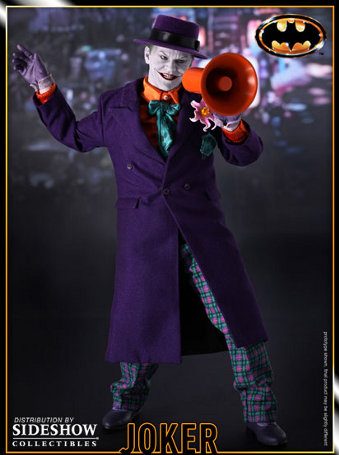 Those masters of the movie-likeness Hot Toys and Sideshow Collectibles have created another spitting image 12-inch action figure that is sure to become a highly sought after collectors’ piece amongst Batman fans and admirers of Tim Burton’s vision of one of DC Comics’ most enduring superheroes – Jack Nicholson as The Joker from the dazzling 1989 Batman movie!

Released as part of the DeluXe (DX) Hot Toys Movie Masterpiece Series, this 1:6th scale action figure boasts a highly detailed head sculpt by the amazing Yulli, with paintwork and art direction by the maestro himself J.C. Hong, and with the highly sophisticated Hot Toys exclusive Parallel Eyeball Rolling System (PERS) you had better watch out – Jack really IS watching you!

The TrueType body has over 30 points of articulation, a variety of different hands, and of course, being The Joker, his outfit is reproduced in spectacular gaudy detail. He is also issued with all the weapons and Joker gimmicks – such as his chattering teeth and magic stick – you could wish for.

And to display the figure The Joker comes with his own light-up figure stand with Joker nameplate, the movie logo and the official DX series title. A must have!