The original TMNTs were created by Kevin Eastman and Peter Laird as a parody of popular comic strips of the day, but with the 1987 Teenage Mutant Ninja Turtles animated TV series and the action figures that followed in 1988 produced by California-based Playmates Toys Inc., they quickly became established as iconic comic book heroes in their own right. 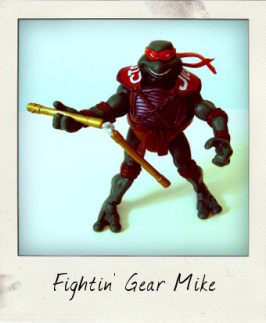 Check out the nunchakus on Mikey! When Teenage Mutant Ninja Turtles reappeared in 2003 in an all new animated TV show Playmates Toys picked up their old license and relaunched their TMNT action figures with series after series of clever and inventive toys. These solidly built 5-inch action figures have great articulation – I love the toes and fingers – and the attention to detail is impressive, as is the thorough array of armour and weapons. Accessories, of course, are easily lost, so I was … END_OF_DOCUMENT_TOKEN_TO_BE_REPLACED 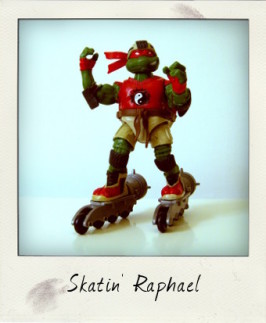 Before taking a bit of an August blogging break I wanted to leave you all with a summery action figure, so what better than Skatin' Raphael dressed up with all his sporting gear? When Playmates Toys relaunched their Teenage Mutant Ninja Turtles line in 2003 to coincide with the all new animated series they produced some truly wonderful and highly inventive action figures – robust articulation, impressive attention to detail and masses of exciting accessories for children to lose down the back … END_OF_DOCUMENT_TOKEN_TO_BE_REPLACED 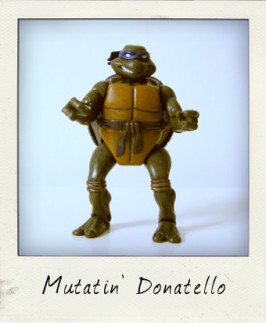 When the animated series of Teenage Mutant Ninja Turtles was relaunched in 2003 by Mirage Studios, the new cartoon kept more closely to the original Eastman and Laird comic books and whilst being kid friendly, had a decidedly darker edge. A new series, of course, in the new marketing-savvy millennium meant a bodacious number of action figures, with Playmates Toys, who had held the license since the first animated series and created the first waves of figures in the late 1980s, picking up where … END_OF_DOCUMENT_TOKEN_TO_BE_REPLACED