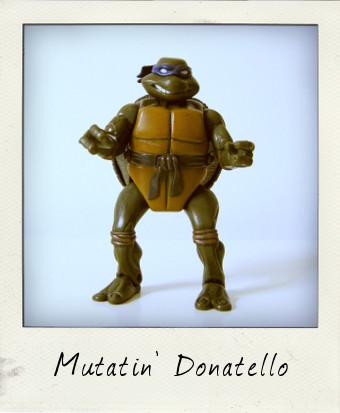 When the animated series of Teenage Mutant Ninja Turtles was relaunched in 2003 by Mirage Studios, the new cartoon kept more closely to the original Eastman and Laird comic books and whilst being kid friendly, had a decidedly darker edge. A new series, of course, in the new marketing-savvy millennium meant a bodacious number of action figures, with Playmates Toys, who had held the license since the first animated series and created the first waves of figures in the late 1980s, picking up where they had left off. 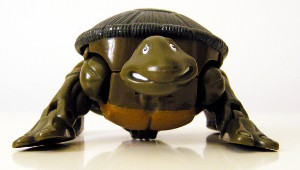 This particular 5 inch figure of Mutatin’ Donatello was part of the most interactive and inventive of the 2003 figure sets, the Mutations line, which saw the TMNT action figures behave somewhat like transformers, changing from baby turtles into fully fledged ninjas by way of an ingenious mechanism. Simply open Donatello’s shell, fold his arms away, switch between the two heads – innocuous turtle or bandanna wearing dude – then pull his legs forward and lay him on his tummy. Sounds easy, doesn’t it? Actually, it’s a little trickier in practice than it sounds and not something I’d do too often, but it was fun exploring the full potential of this figure.

The original Donatello action figure was packaged with something described as slimy ooze if kids really wanted to make the whole mutation thing extra gross. I’m more than happy to forego that part and reading reviews online have gathered that the stuff was a devil to remove from carpets! In fact, this figure does still bear slight traces of some sticky substance that seems to have set like concrete! The figure itself is a great likeness and each figure was accurately colour matched – Donatello here is a light, brownish green, whereas Raphael, for example, was a brighter green. As for other accessories, this action figure came with Donatello’s signature weapon the bo-staff, but that must have fallen down a sewer somewhere!