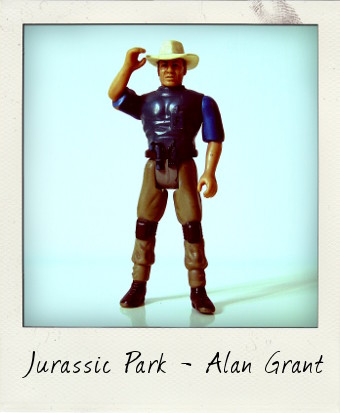 One of the things that becomes patently clear when one looks at action figures of as recently ago as the mid 1990s, is that kids were clearly far less demanding about having their spin-off toys actually look like the actor in the film. This 5 inch Jurassic Park action figure with the standard five points of articulation was issued by Kenner in 1993 at the height of Jurassic Park movie mania and was an enormously popular figure in a line that leaped off toy store shelves as fast as you can say “T-Rex”! The fact that the facial sculpt didn’t even come close to resembling the actor Sam Neill who played Doctor Alan Grant in the movie didn’t seem to matter one bit! He’s recognizable more than anything by his hat!

Facial resemblance aside, the figure is pretty cool nevertheless – I love the way his right arm can be positioned to make him look like he’s either holding onto his hat or gripping his belt, although with his hat, black flash light and walkie-talkie all glued to his body, that’s as far as the interaction with these features goes. Kids could have more fun with the loose accessories that came with the figure – a backpack with a net launcher, a net, a hand held bomb and a baby Pteranodon dinosaur (all lost with my loose figure). In fact every human figure in this first series of Jurassic Park toys came with its own baby dinosaur figure and weapon, as well as a collector’s card.

If you’re unfamiliar with this line look out for the blue name badge with the JP logo which appears on all the characters – Ellie Sattler, Robert Muldoon, Tim Murphy and Dennis Nedryand – as well as some of the smaller dinosaurs too. On my Alan Grant action figure the JP transfer is still just about visible on a tag on his shirt. The figure has seen some heavy duty play, has quite a bit of paint wear and is far from collector grade, but as a market stall find it was still an irresistible purchase!