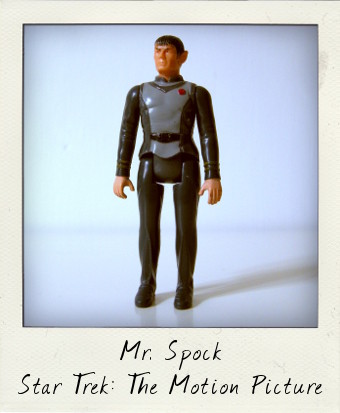 Mego’s original 8-inch Star Trek action figures hit stores in 1974 and are arguably some of the most well known and indeed well loved figures the toy company ever produced. The Mego figures were tied to the 1960s TV series which continued to have repeat showings all over the world throughout the next decade and beyond, but when Star Trek: The Motion Picture was first announced Mego had to negotiate with Paramount to ensure that they would also get the license to produce the movie toys too. This was 1979 and Kenner had revolutionized the action figure world only a couple of years earlier with their 3 ¾ inch Star Wars figures – Mego, understandably, decided that was the direction they should take with their new Star Trek line. Somehow, Mego didn’t manage to replicate Kenner’s runaway success, however, and sales of these figures were as disappointing as the critical reviews of the movie, in spite of the film doing very well in terms of box office receipts.

Looking at this Mr. Spock figure over thirty years later, though, he looks great and it’s hard to understand the line’s limited appeal. He has the standard five points of articulation of any 3 ¾ inch figure of the day – neck, shoulders, and hips – and the facial likeness of actor Leonard Nimoy is pretty good for such a small scale. There are also some pleasing details in the sculpt of the folds of his clothes, the trim on the uniform and raised colour braids on the sleeves to indicate rank. In line with the uniforms in the movie his shoes even appear to be built into the trouser legs!

Mego released two series of 3 ¾ inch figures in 1979 and 1980 respectively with the first dedicated to Spock and his fellow crew members Kirk, Decker, Ilia, McCoy and Scotty. Needless to say, Spock and Kirk were the most popular of the bunch. Mego also released 12 inch versions for Star Trek: the Motion Picture which more closely resembled their earlier 8-inch style of figure making with cloth accessories, although I’ve always thought they look a little bit too much like dolls and prefer the all plastic smaller figures.