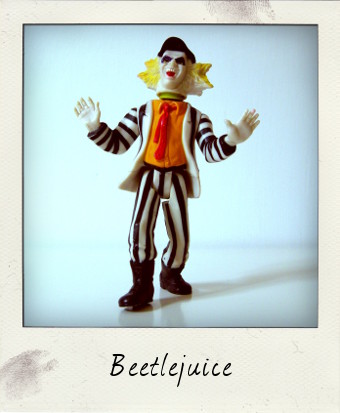 There are some action figures that seem to divide collectors straight down the middle – you either love them or hate them – and the 5 inch Kenner Beetlejuice action figures from 1989 seem to fall into that group. I personally adore these figures and have no idea why some collectors gripe about them, as they look good, feel good and have some fun interactive extras. The most eagle-eyed readers have probably already spotted the most obvious interactive element with these figures – the heads on the four different figures in this line were actually interchangeable, which means that whilst you might pick up a figure for a few dollars he might not be wearing the “correct” head with which he was originally issued! 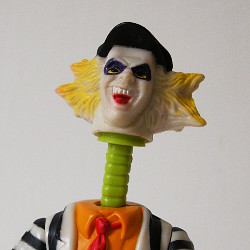 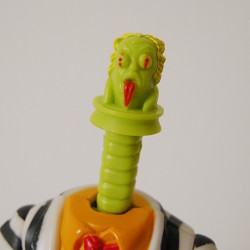 The figure stands well and is satisfyingly heavy when held in the hand. I love the way his slightly rubbery hands can be posed in that It’s Showtime! classic Beetlejuice stance from the Tim Burton film. The head is also made of a slightly softer rubbery plastic (presumably to facilitate popping it on and off) and has what was a pretty good facial sculpt for the 1980s with a close resemblance to how Michael Keaton looked in the movie, although the purple colouring around the eyes is a detail that comes from the animated cartoon series – his eye make-up is black in the film. If you’re planning to collect them all (you KNOW you want to) the other figures in the line were Spinhead Beetlejuice and Exploding Beetlejuice.