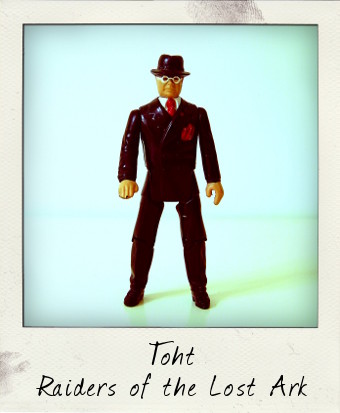 One of the secrets of the success of many movie spin-off toy lines is surely not only the popularity of the hero, but also that of the nemesis. Kenner’s wonderful 1982  series of 3 ¾ inch action figures – Adventures of Indiana Jones in Raiders of the Lost Ark – is a case in point, where Indiana Jones has several seriously bad guys to face down during the film as he struggles to block Nazi efforts to get their hands on the Ark of the Covenant. I’m assuming that anybody reading this post has seen Raiders of the Lost Ark – if you haven’t, then I should alert you that this post might contain a few spoilers! Arnold Ernst Toht, the Nazi Gestapo agent sent to recover the headpiece of the Staff of Ra and who meets a spectacular cinematic demise in the grand finale, is just one of Indy’s enemies to be immortalised as an action figure. 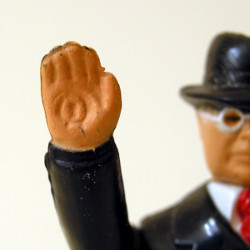 The Toht action figure was released as part of the first wave of figures which also included the Cairo Swordsman, Indiana Jones himself and Marion Ravenwood. The male characters all have 7 points of articulation in the neck, shoulders, knees and, as with the Indy desert disguise action figure we featured a while back, additional hip articulation. The attention to detail is great on this figure as any fans of the movie will confirm – for once he really does bear a striking resemblance to the late actor Ronald Lacey as he appeared in the film. The black suit, black cape (which my figure is sadly missing) and black hat (glued on) are spot on, and he was even issued with a German Luger, an entirely different pistol from the one included with Indiana Jones figures. The finest detail, however, is almost a hidden extra if you know where to look! His right palm bears the all important scar he receives when he tries to pick up the red hot headpiece to the Staff of Ra when Marion’s tavern burns down.

An excellent vintage action figure all round!