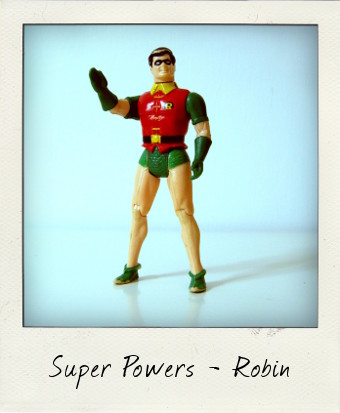 Scrolling back through recent posts I realised that this website is a little light on Batman, so let’s fix that right away with a look at his erstwhile sidekick Robin as he appeared in the first series of Kenner‘s wonderful Super Powers action figures from 1984. This 4-inch figure was a superb version of The Boy Wonder – given his more mature nickname The Teen Wonder on the packaging – and like the other figures in the line had his very own Super Power. Wait, I hear you cry, Dick Grayson may have have a whole lot of circus acrobatic stunts in his bag of tricks, but saying that as Robin he was possessed of super powers is stretching things a little! Be that as it may, our Robin here comes with a nifty gimmick – if you squeeze his legs together his right arm will deliver a Power Action Karate Chop! In fact, this figure was so good that when Toy Biz released its vastly inferior DC Super Heroes line in 1989,  they recycled the Robin mold. The figures are easy to tell apart however – the Toy Biz version has inferior paintwork, a lever sticking out of Robin’s back and does not have the distinctive Kenner peg holes in his feet.

As with all the action figures in the Super Powers line the attention to detail is great – I particularly like the rippled fabric molding on his green shorts, the turned down flaps on his boots and the precision of the yellow laces along the front of his red tunic top, which are both molded and painted. He also has a fine pair of athletic legs – with shorts that tiny he could almost pass for a 1970s footballer!

My Robin is still in fine Karate-chopping working order, although he has lost the cape accessory with which the figure was originally issued and has suffered a little paint wear to his hair flick.

Definitely a series to track down and collect in its entirety!