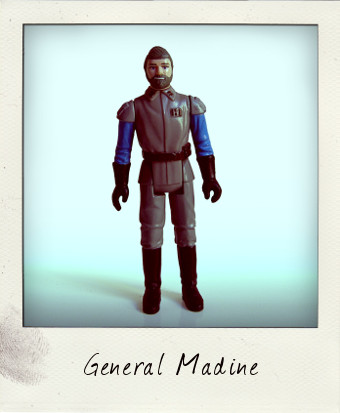 When Kenner issued General Madine as part of its first wave of Return Of The Jedi 65-back carded figures in 1983 the resulting action figure followed the company’s hit-or-miss track record of movie-likenesses, with only a vague resemblance to the actor Dermot Crowley who played him on screen. Instead of Crowley’s fair beard and hair, Kenner opted instead for a thick grey Kenny Rogers-style beard and mane! This turned out to be of little concern, however, when sadly for Kenner – not to mention Crowley – most of General Madine’s scenes during the Battle of Endor never actually made it past the cutting room, with only a brief appearance in the rebel briefing room scene hitting the big screen, meaning that back in the day the General Madine figure didn’t exactly fly off toy store shelves. It was later “sold-off” in Return of the Jedi bargain 2-Packs with other remaindered figures such as the Biker Scout.

In spite of his fleeting appearance in the film, however, the former imperial officer and rebel leader General Crix Madine went on to become a favourite amongst fans of the extended Star Wars universe, with a detailed back story, which evolved through the novels, making this vintage figure perennially collectible.

The figure also provides plenty of grist for the variant collector’s mill with several major variations in paint ops existing. General Madine was produced with heads molded in either grey plastic with flesh paint added to the face areas, or flesh-coloured plastic with the beard and hair painted instead. Bizarrely, as with my Madine here, some figures were produced with a distinctly sage green, rather than grey, paint ops on the hair and beard.

The second major variation with this figure lies in the limbs. Most figures were molded with grey limbs, which were then painted black on the gloves and boots, while figures from Taiwan used black limbs, with the grey trousers and blue and grey sleeves painted over the top. Sure enough, checking the COO and copyright information on the back of the legs on my figure, “MADE IN TAIWAN” runs downwards on two lines on the back of his right thigh, with some minor scratches on this loose figure revealing the black mold under the grey paint op.

Inevitably, my loose General Madine has mislaid his Rebel Battle Staff accessory, but he’s still a great vintage find nevertheless and a fine addition to any Star Wars collection.