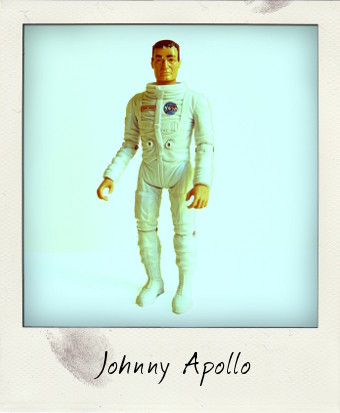 It’s an amazing thought, yet when toy making giants Louis Marx & Co. first launched the Johnny Apollo action figure in 1968, man had yet to land on the moon! Astronauts, of course, were all the rage, with the Soviet Union and the US neck and neck in the Space Race, with our Johnny here named in honour of the US Apollo program which would succeed in putting the first humans on Earth’s Moon the following year in 1969.

Molded in heavy, highly detailed, white poly-plastic, Johnny Apollo was so solidly built that it is still possible to find loose figures in excellent condition almost 44 years after his initial release.

I grabbed this figure for an excellent price very recently – his white space suit was fairly grubby after years of play, but after a quick clean with some baby wipes, he came up looking good as new, and very white. In fact, I own many considerably newer figures that have suffered far worse plastic yellowing over the years. His head and hands were molded in flesh tones, with his hands in particular cast in a soft, rubbery vinyl allowing him to grip his many gold plastic accessories better.

Standing 7 ½ inches tall, and with an impressive 9 points of articulation including ball joints with metal rivets at the elbows and knees, riveted shoulders and hips held together by springs, as well as a swivelling head and wrists, Marx were clearly proud of the articulation on this figure calling him the “Movable Spaceman” on the box. The joints and springs on my Johnny Apollo are still very tight and he poses perfectly. Most of the paint is still on the rivets too, as are two of the original decals on the front of his space suit – the NASA and all important Johnny Apollo name badge. 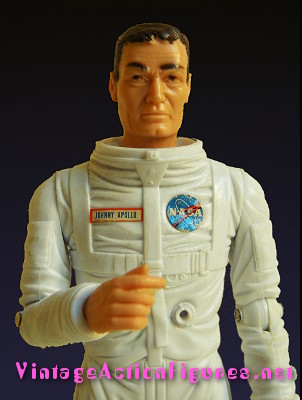 The attention to detail on the sculpt is second to none – the facial sculpt is classic Marx and very reminiscent of the earlier Johnny West cowboy figure line, with his rugged cleft chin and determined expression, whilst the spacesuit is packed with pockets and straps and beautifully observed folds and seams. I particularly love the lacing on his high space boots! The paintwork on the face, however, is the only slight disappointment – the irises and eyebrows have been daubed somewhat carelessly and don’t quite match the precision of the sculpt. This is only really noticeable under very careful scrutiny however. 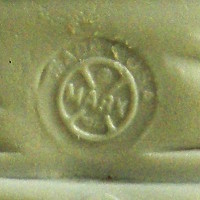 Made in USA by Marx

The back of the figure carries the famous Marx logo was the name “MARX” set in a circle with a large “X” crossing through it, resembling a railroad crossing sign, as well as the country of origin “Made in USA”.

Johnny Apollo was issued with a massive selection of 17 accessories including a helmet, oxygen pack, a variety of hoses and tools. Cast in gold plastic they really look wonderful on this figure, but sadly my Johnny Apollo has mislaid his. Nevertheless, he is a wonderful vintage find! Look out for the companion figure Jane Apollo in blue, and the UK version Mark Apollo in orange.