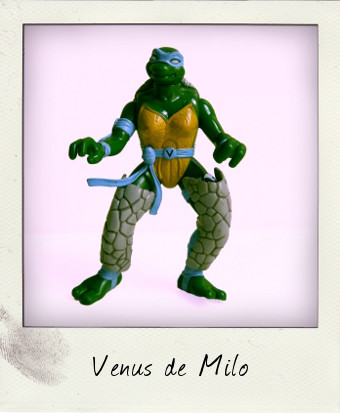 When Michael Bay, producer of the forthcoming Ninja Turtles movie, announced earlier this year that in the revamp Donatello would now be a female turtle named Donatella, Internet forums were quickly filled with angry comments from die-hard fans…until people noticed the date and realised that this news had been nothing but an April Fools’ Day hoax!

But what is it about girl turtles that seems to upset folks so much!? As it happens, “Donatella” if she had ever happened, would not have been the first attempt to introduce a female turtle into the gang. As a last ditch attempt to squeeze every possible drop out of the declining TMNT franchise in the late 1990s, Saban Entertainment produced a short lived live action TV series for Fox Kids – Ninja Turtles: The Next Mutation – which introduced a female mutant turtle called Venus de Milo (aka Mei Pieh Chi), named, of course, after the ancient Greek statue. Clearly, however, many fans were disturbed by the sight of a girl turtle with the slightest hint of breasts under her shell. Whether the presence of Venus was really to blame or not for the cancellation of the show in 1998 after only a short run, nowadays poor Venus seems to have been completely expunged from the list of characters in the TMNT universe on their official website.

Exist she did, however, and here is the proof…a Venus action figure from the 1998 Playmates Toys “Turtleflage Camo-Armor” subset of Next Mutation figures. I found this Venus loose in a thrift store recently, but was delighted to see that she still had her leg armour attached which helped me successfully identify this figure. Apart from their camouflage armour, the Turtleflage figures were identical to the basic Next Mutation figures released the previous year – indeed, this Venus is date-stamped 1997. Sadly, she’s missing the rest of her camouflage gear, or rather “Strap-on Battle Blend Armor”, which included arm armour and a mask, as well as two vicious looking “Tri-Ball Mace” weapon accessories.

I rarely collect figures in the original box, but in the case of this Venus figure, the original blister would be fun to own – as each figure in this series had its own unique camouflage armour, a matching cut-out-and-keep background card with the same pattern was issued as part of the packaging .

The articulation is pretty limited for a 5-inch figure – five points only at the neck, shoulders and hips – but the limbs are slightly bendy, with a soft, rubbery skin-like finish, which gives the impression of greater articulation, and the extra play factor of the camo-armor compensates for the lack of moving joints. The rest of the figure, from her cyan bandana, belt and leg strap, braided plait and the Yin-Yang symbol on her arm, presumably as a reference to her Chinese origins, make her a great match for her TV-show counterpart.

Love her or hate her, Venus de Milo is a must-have item in any Teenage Mutant Ninja Turtle action figure collection!