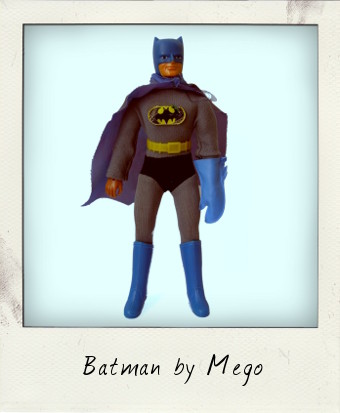 I recently returned home to Rome from my summer holidays in the UK visiting friends and family. I managed to pick up a few action figure bargains in flea markets, but also made some exciting discoveries in my parents’ loft! As a kid back in the 1970s my younger sister had some pretty cool action figures. I vaguely remembered her having owned a Batman and Robin and a Planet of the Apes figure, so had been itching to send Dad up into the attic for some time to check if they were produced by the mighty Mego! It took some digging around to find them – thanks Dad! – but eventually a biscuit tin was found which proved to be a treasure trove of Mego figures in fantastic condition. Clearly, my sister played with her toys very carefully! I’ll share all of the finds over the next few weeks, but to kick things off here’s Batman, one of the Mego Fist Fighting Super Heroes. 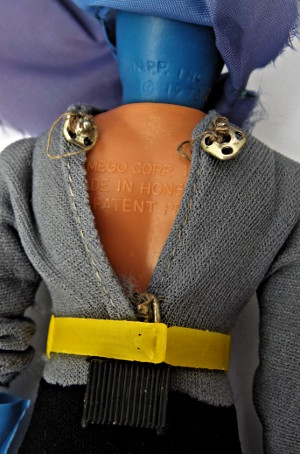 UK toy maker Palitoy was one of Mego’s strongest business partners and whilst the copyright information on the back of this 8-inch action figure names only Mego, this figure would have been distributed by Palitoy – the clue is to be found in the black button that drives the fighting mechanism on the back of the figure, as the US figures were flesh coloured. It took a while to get the hang of it, but when the left arm is pulled out movement is blocked in that arm allowing the figure to give a powerful karate chop with the right arm – not bad for an action figure that is over thirty years old!

Mego first launched the World’s Greatest Superheroes line in 1972 and the copyright information on the back of Batman’s head includes that date and N.P.P. Inc. (National Periodical Publications Inc aka DC Comics), although this figure wouldn’t have actually hit UK stores until a few years later in 1976.

By the time the Fist Fighters come on the scene Mego’s Batman was being produced with a molded head, the so-called “Painted Cowl Batman“, although he was still issued with a loose fabric cape, plastic boots and a pair of curious plastic mittens that slipped over his hands and looked rather like oven gloves. When I took these snaps I though that one of the gloves had gone astray, but no sooner had my plane landed in Rome, my mother called to tell me that she had found the other missing glove…at the bottom of the biscuit tin, naturally! The paper logo glued to his chest is also still miraculously intact, if a little battered, and he still sports his translucent plastic belt. All in all, a fantastic find…

Note to self: Thou shalt not covet thy sister’s action figures!