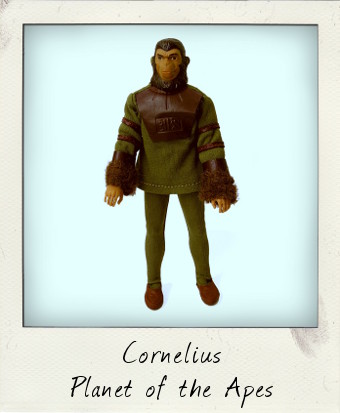 As promised in last week’s post, here’s another of the Mego action figure treasures from the loft that were excavated on my last trip back home to visit family in the UK. Like the Fist Fighting Batman we looked at last time, this is another highly collectible action figure that my sister played with as a child. Of all her toys, this 8-inch Mego Cornelius figure is one that I remember in particular as being one of her absolute favourites. As kids we adored the Planet of the Apes TV show and would tune in every Saturday morning to watch it during the mid-1970s. 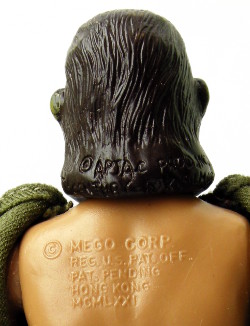 The Planet of the Apes action figures were Mego’s first outing into the wonderful world of movie spin-off merchandising. Appearing in 1974, a full six years after the release of the original 20th Century Fox film, the first wave of figures were based on characters from the movie – Cornelius, Zira, Dr. Zaius, the Soldier Ape and “the Astronaut”. Charlton Heston, who had the kind of face that simply begged to be transformed into an action figure, sadly refused to grant Mego the licensing rights to use his likeness. Mego’s timing, of course, couldn’t have been better. In 1975 Planet of the Apes hit the small screen with an hour long weekly television series, so Mego added the characters from the TV show to the line too – Galen, Alan Virdon, Peter Burke, General Urko and General Ursus. This Palitoy distributed figure from the first wave would not have been released in the UK, however, until 1975.

This figure is in wonderful condition. All the joints are nice and stiff, his green tights and top with details in maroon vinyl are pristine and, miracle of miracles, BOTH moccasins are still wedged tightly onto his stockinged feet! The back of the figure includes the Mego patent information for the body part dated 1971, whilst APJAC Productions, the movie production company that first acquired the rights to Planet of the Apes shares a credit (as APJAC Prod Inc) with 20th Century Fox on the back of the head. Note also, that this is a green-eared version of the figure (some Cornelius heads have tan ears). My ears are pretty green right now too – with envy! What a fantastic figure!