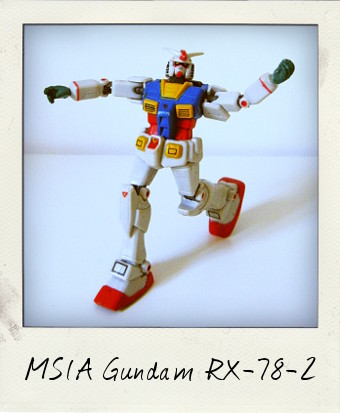 It’s always fun hunting down vintage action figures on market stalls or in thrift shops, but this snap-together Gundam model kit proved more of a challenge than most. I spotted the limbless and headless torso first, in a box of mostly broken toys and it took a lot of painstaking rummaging around before I managed to gather and assemble all his parts! With hands and feet and even shoulder pads detached, I was incredibly satisfied to have at least found all his body parts, if not all his accessories – he’s missing a shield, his bazooka and beam sabers, not to mention the beam saber handles on his backpack, which have snapped cleanly off.

I’m no mecha or anime expert but this particular design from the Mobile Suit Gundam universe – the RX-78-2 Gundam based on Kunio Okawara’s illustrations – is nothing short of iconic and instantly recognisable. In fact, to celebrate the 30th Anniversary of Gundam, a giant 59-foot fibreglass-reinforced plastic version of this very figure towered over Tokyo during July and August 2009. At just over 4 inches tall, my Gundam is somewhat smaller, but makes up in articulation for what he lacks in size – he lends himself well to just about any pose into which you may care to put him!

This figure was made in China and released by Japanese company Bandai in 1999 to celebrate the 20th anniversary of the franchise. This is the international version of the figure – the original Japanese release included detailed black panel outlines. He may have faced a few battles over the years with kids re-enacting the One Year War with him, but this Gundam is still nice and bright and his EFSF (Earth Federation Space Force) and Pegasus class decals on the shoulders are still intact. A great find!