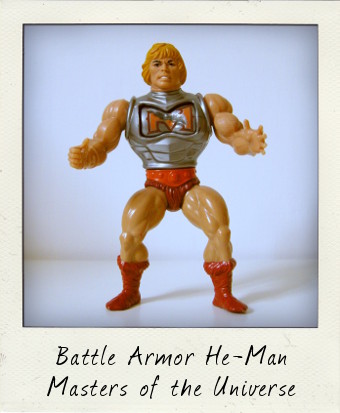 Love him or hate him, there’s no doubting that the star of last week’s post – Arnold Schwarzenegger in the guise of Terminator – is a tough act to follow. Unless, of course, you sport a set of muscles that would put even the one-time Mr. Universe to shame! Who better to follow Arnie than that blonde barbarian with the bob from Masters of the Universe, the Most Powerful Man In The Universe himself …He-Man!

The year was 1984 and Mattel needed a way to spice up He-Man. No longer satisfied with simply twisting their hero’s waist almost completely around and landing power punches on Skeletor – or tired of simply getting him to stand up at all, once the rubber bands in his legs had started to weaken – eighties kids demanded more! Mattel, as ever, was up to the challenge and created an exceptionally cool variation based on the original He-Man figure – the legendary Battle Armor He-Man. His chest had three damage indicators and could switch between them if even slightly touched, allowing for great interactive play with other figures in the line. The Battle Armor He-Man action figure could start a fight with an undamaged chest plate and finish it with one or two slashes to his armor – battle damaged, but still the winner!

This vintage figure of mine has typically lost his accessories – a power sword and battle axe – and his lower limbs certainly put a whole new spin on the term bandy-legs, but his all important battle armor gimmick still works perfectly making this a great vintage action figure find! Check out the video to the right to see his battle armor in action.