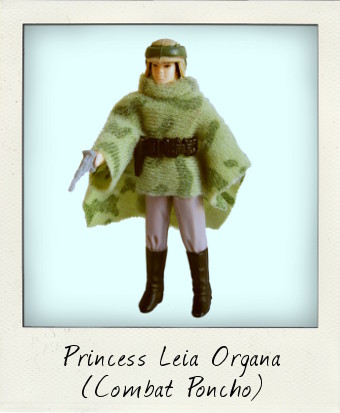 This blog has been running a little low on girl power recently, so let’s fix that right away with a truly wonderful vintage figure from Kenner’s legendary 3 ¾ Star Wars line – Princess Leia Organa sporting her Endor combat poncho. It’s a staggering thought today, but of the entire list of 93 characters immortalised in the original Kenner line, Princess Leia is the solitary female. As if to make up for this, besides her iconic white robed figure as she appeared in Star Wars, Princess Leia was issued in several different guises, which charted her progress through the three original trilogy movies: from beautiful princess in need of rescue, to this tough rebel in combat gear.

First appearing on the Return Of The Jedi 77 back card in 1984, this Endor version of Leia is packed full of accessories – a fabric camouflage poncho drawn in at the waist by an adjustable black holster belt, which in turn holds her grey Endor Blaster, as well as an extremely cool helmet. All accessories are removable and I was thrilled to come across my Leia Organa with a complete set, albeit with a repro weapon. She has the standard 5 points of articulation at the head, shoulders, and hips, but her wide-legged stance and the slight flexibility of her legs will allow her to straddle the Speeder Bike vehicle issued the previous year. 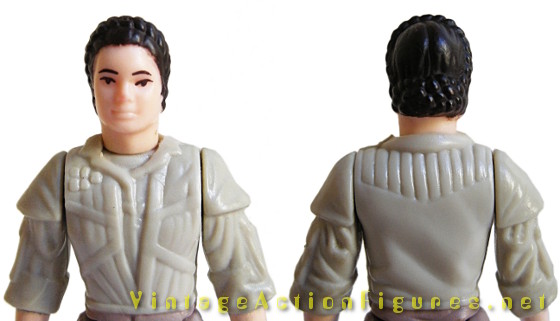 As with so many of the Kenner figures the attention to detail is second to none and no short cuts were employed with the sculpt for the figure hidden under the poncho. Two distinct variations exist in the body mold – my version is the second of the two sculpts identified by the pattern of five square boxes in the rank bar on the upper right of her torso, and the pointed, rather than rounded, bottom line of the shoulder pattern on the back of the torso. The figure is date stamped “© L.F.L. 1984” running downwards on the back of her left boot, with no country of origin.

The head is a passable portrait of Carrie Fisher with delicately painted features, and an extremely accurate hair sculpt of Leia’s famous plaits/braids. Fisher confirmed earlier this year that she’ll be reprising the role of Princess Leia in the 2015 Star Wars: Episode VII movie – with JJ Abrams in the director’s chair – so now is an excellent time to start investing in vintage Leia figures before they become hugely popular again. Collect them all…you KNOW you want to!