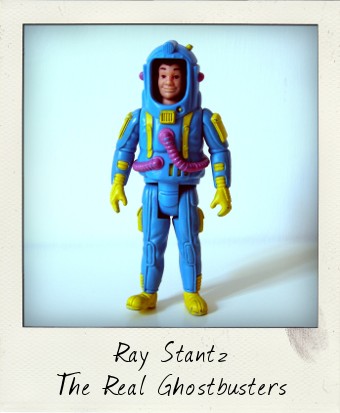 Until the Teenage Mutant Ninja Turtles burst upon the action figure scene and won the hearts of flaky kids everywhere who instantly, en masse and seemingly across the entire planet, dropped what they were playing with and started nagging their parents for one of those four adolescent reptiles, Ghostbusters figures ruled the roost.

The Real Ghostbusters action figures were produced by Kenner under license from Columbia Pictures and were based on the animated television series, which was in turn based on the smash hit 1984 film starring Bill Murray and Dan Ackroyd – Ghostbusters.

The action figures, like the TV show itself, were made from 1986 to 1991 and are still immensely popular amongst collectors today. The toyline featured all four of the paranormal investigators Dr. Peter Venkman, Dr. Egon Spengler, Winston Zeddemore, Dr. Ray Stantz, as well as their secretary Janine Melnitz, not to mention a plethora of ghosts and gadgets and innovative features. 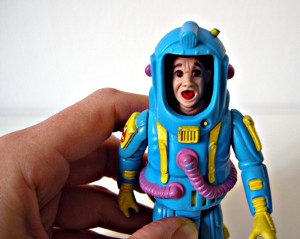 This vintage Real Ghostbusters 5 inch action figure from 1989 is a great example of the emotive expressions Kenner explored in their Super Fright Features series (the sequel to the Fright Features). Ray has a lever on the back of his space suit which causes his head to swivel between smiling serene Ray and screaming Ray! I Ain’t Afraid of No Ghosts went the theme tune but clearly Ray is just a little bit scared. I picked this up in a second hand shop recently and was amazed to find that it still works (see photo). He’s suffered only minor paint wear and the all important Ghostbusters logo transfer is still intact, although he has mislaid his accessories – a strange looking piece of unnamed equipment and Monster Mouth Ghost – as is more than often the case with vintage loose figures. A great find nevertheless!