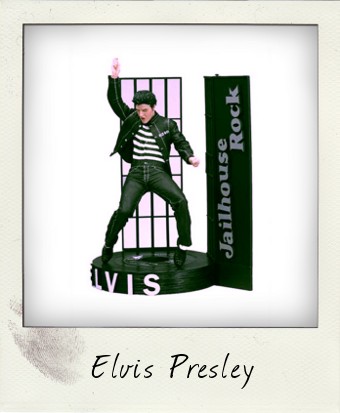 Elvis Presley’s much maligned but undeniably astute business manager “Colonel” Tom Parker understood better than anybody else very early on in Elvis’ career how to market the King of Rock ‘n’ Roll as a commodity. Elvis memorabilia and gadgets of every type were essentially the brainchild of Parker who never ever missed a chance to make a dime.

Today, on what would have been Elvis Presley’s 75th birthday and more than thirty years after his premature death at the age of only 42, millions of Elvis Presley fans all over the world are celebrating the anniversary of his birth.

I’m a huge Elvis fan myself and need no excuse to say Happy Birthday Elvis, with another look at the McFarlane Toys Elvis action figures which have been released over the years. Working officially with Elvis Presley Enterprises they have marked historic moments in Elvis’ life and career with some highly collectible action figures such as the 50th anniversary of the release of the King’s first record, the Aloha from Hawaii Concert and the landmark TV show which has since become known as the  ’68 Comeback Special.

Fans and collectors seem set to grab any new Elvis item to add to their collection. As far back as 1993, Colonel Tom defended his own marketing of Elvis, when he said: ‘I don’t think I exploited Elvis as much as he’s being exploited today.’