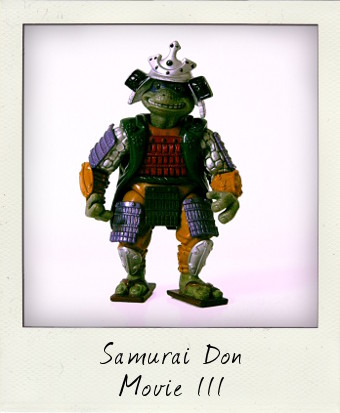 By the time everybody’s favourite reptiles had appeared on the big screen for the third time in 1993 in the unimaginatively entitled movie Teenage Mutant Ninja Turtles III, TMNT fever was maybe waning a little since its frenzied heyday of the late eighties. Certainly, this live-action movie suffered from poorer quality costumes – Jim Henson’s amazing Creature Shop had been involved in the previous two cinema outings and was missing from this production – although, with an adventure which saw the turtles transported back in time to ancient Japan, how could the tie-in action figures be anything other than awesome?! Regardless of the quality of the movie, the accompanying Playmates Toys 5-inch TMNT action figures were extremely cool.

Following my golden rule – it is almost impossible to have too many Teenage Mutant Ninja Turtle action figures – I grabbed this Don dressed as a Samurai from the Movie III series right away when I found him on a market stall the other day. With only seven points of articulation – the standard neck, shoulders and hips, plus extra cut joints at the elbows (some articulation at the knees would have been nice) – movement is pretty limited, although more than enough if you only need to pose him as a display figure. And he displays beautifully, thanks to Playmates’ attention to the details on this one, from the carefully molded Samurai armour to his Kabuto-style helmet. I particularly love the bumpy skin texture for the face, hands and feet – check out the freckles too!

Samurai Don - with and without Honor Guard Mask

He was originally issued carded with an impressive array of accessories – a Time Slippin’ Scepter, a Close-Up Kama blade weapon, a pair of Backlot Bos (Donatello’s weapon of choice), as well as the Honor Guard Mask, which my Don was luckily still wearing when I found him.