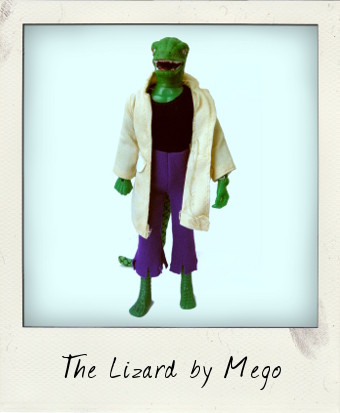 The World’s Greatest Super Heroes was the line that made Mego’s name, kicking off with the most famous characters from DC Comics and then moving into the Marvel Universe with a plethora of new heroes appearing from 1975 onwards such as Captain America, the Hulk and Spider-Man. A line of good guys only would have been no fun at all though, so a couple of villains were thrown in for good measure – The Green Goblin and The Lizard. When Mego’s UK distributors Palitoy added Marvel characters to their Fist Fighting line a few years later, however, The Lizard was the only Marvel bad guy to make the assortment. 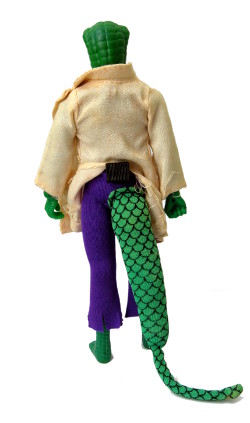 Over the last couple of weeks I’ve been taking a closer look at some vintage 8-inch Mego figures that belonged to my sister when we were children, and this wonderful Lizard is another immaculately preserved figure that has just been thrust into the limelight after spending much of the last couple of decades in a biscuit tin in the loft! Unlike the Batman and Cornelius figures, however, I have to confess my memories of this figure are considerably fuzzier and I had to brush up on my Marvel lore in order to be able to identify him at all!

The Lizard aka Dr. Curt Connors was once a gifted surgeon before accidentally turning himself into a giant reptile – hence the lab coat – and a one time friend-turned-foe of Spider-man. Sadly, my sister never had a Mego Spider-man so I guess this one had to make do with using his fist fighting punches on Batman instead! His right hand is even ready-sculpted into a fist, attached to a movable wrist, whilst the left hand has an open palm. 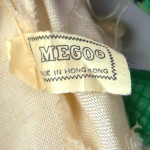 This really is a superb example of the inventiveness of the Mego WGSH action figure range – I love the way they handled the tail, for example – the character wears a bodysuit with an incorporated fabric tail, whilst the lab coat is a separate item of clothing worn over the top. Luckily, all the parts on this figure are vintage original and the lab coat – often the first accessory to disappear up the hoover with this particular figure – bears the Mego logo on the label as proof of its authenticity. The fist fighting action still works via the black lever on the back too.

All in all another fantastic find…and there is more to come! Watch this space for more Mego magic soon!