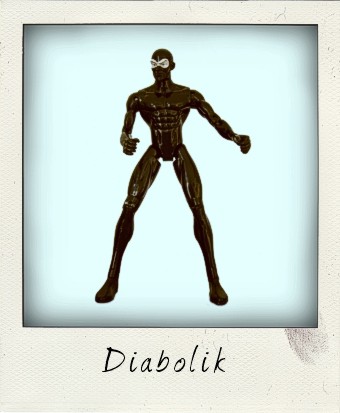 I’ve lived in Italy since 1994 so thought it was time to feature an Italian vintage action figure – Diabolik!

First created by the Giussani sisters Angela and Luciana and published by Astorina in 1962, with drawings by Gino Marchesi, the master thief and Jaguar E-Type driving anti-hero Diabolik still appears in annual black and white comic booklets to this day. A criminal genius with a weakness for jewels, Diabolik targets the underworld in a daring life of crime, with his lover Eva Kant at his side, always keeping one step ahead of his arch enemy Police Inspector Ginko.

Dressed head-to-toe in black with only his piercing eyes showing, his appearance is a deliberate reference to the earlier French comic book character Fantômas.

Diabolik quickly made it to the big screen in 1968 when horror director Mario Bava directed the movie Danger Diabolik, starring John Philip Law as the cat-suited Diabolik and Marisa Mell in the role of Eva. Then in 1999, he became the star of a major animated series – Track of the Panther – although the ruthless killer was somewhat toned down into more of a good guy with Robin Hood’s morality and James Bond-style gadgets! The co-production between Saban Enterprises International, France’s M6, Italy’s Mediaset and Toho/Ashi Production Company of Japan was shown through European Fox Kids TV channels.

It was this cartoon series that saw the launch of a line of spin-off toys and action figures made under license by Italian toy giants Giochi Preziosi. Whilst most of the figures in the line were highly articulated, this 12 inch Diabolik D-Ultimate was, as its name suggests, top dog with ball-jointed shoulders and hips, as well as neck, elbow, knee, and even wrist and ankle joints. He came originally equipped with backpack, grappling hook with rope, and a dagger although my Diabolik seems to have lost those along the way.

With the release of the 2009 video game Diabolik The Original Sin for Wii, Playstation Portable, PC, Nintendo DS and Playstation 2 systems, his popularity looks set to stay!