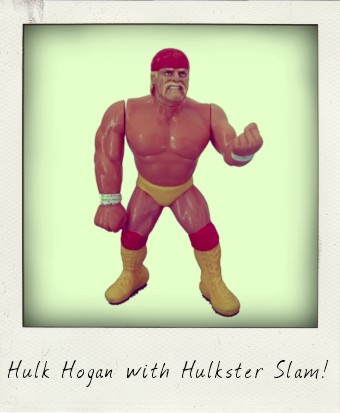 After a great August break we’re back in the saddle here at Vintage Action Figures with a bit of 1990s wrestling nostalgia with this vintage WWF Wrestling Action Figure of Hulk Hogan made by Hasbro under license from Titan Sports.

Hasbro took over production of wrestling figures when toy-makers LJN – responsible for the enormously popular Wrestling Superstars line – folded in 1989.

This particular Hulk Hogan is the fourth of 4 different Hulk Hogan figures that Hasbro made, and as with others in the line, features a trademark action move – the Hulkster Slam! This loose figure was originally sold as part of the Blue Card Series 5 and although the figure is in reasonable shape, it has seen a bit of paint wear, with the yellow Python Power transfer on the red bandanna having suffered the most. In spite of small defects, I was powerless to resist the power of Hulkmania, and snapped this one up at a market stall.