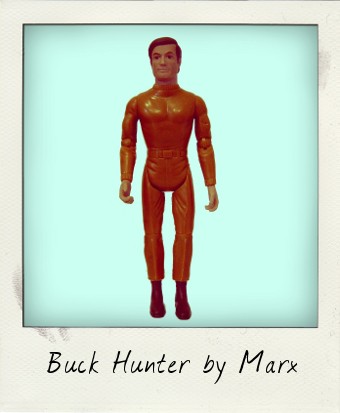 Every now and again I'll buy an action figure simply because it looks interesting even if I haven't the faintest idea as to what, precisely, I'm buying! This was the case with this chap – I loved his natty 1960s-style clothes and boots – he looked like some generic spy or military figure, although I simply couldn't place him. The Italian postal service leaves little to be desired and I'd all but given him up for lost, but after a month he finally turned up in the post from the US the other day. 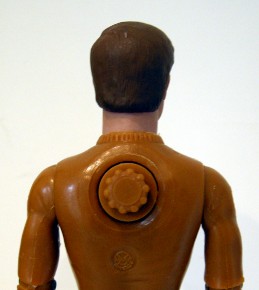 Dial on back of Buck Hunter action figure

Having made my purchase based entirely on a blurry photograph on a vintage collectibles website, once I had him before me I was still none the wiser as to his identity. What I did know was that the figure had been produced by the Louis Marx toy line, thanks to the clearly recognisable logo on his back, found just below another interesting detail – a dial which raised and lowered his right arm.

The Internet is full of wonderful websites dedicated to vintage Marx action figures and it was finally thanks to Scott at the amazing Marx Best of the West resource, who replied to my email enquiry in seconds flat, that I eventually discovered that this was none other than Buck Hunter from the 1975 toy line "Safari Adventure".

Solidly built with quite complicated points of articulation and measuring just over 7 inches tall, he's in great shape, although I've now discovered my Buck Hunter is buck naked (almost)! He originally came with a beige cloth safari jacket, safari hat as well as weapons, vehicles, play sets including animals and accessories, not to mention other safari chums Sgt. Kogo the guide and Kim the photographer!