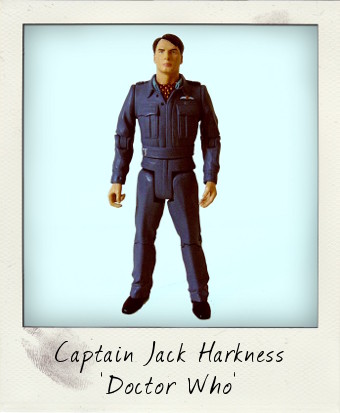 When John Barrowman first appeared in the BBC’s relaunched Doctor Who sci-fi television show in 2005 in the role of Captain Jack Harkness he was disguised as a Royal Air Force pilot and this is just how he is presented in this wonderful 5 inch action figure by Character Options. Teaming up with the Ninth Doctor and assistant Rose in a two-part wartime story The Empty Child and The Doctor Dances set in London during the Blitz, the swaggering, sexy and brazenly bisexual Captain Jack acquired overnight cult status in Britain, and as Doctor Who fans will know, later went on to star in the hit spin-off show Torchwood. 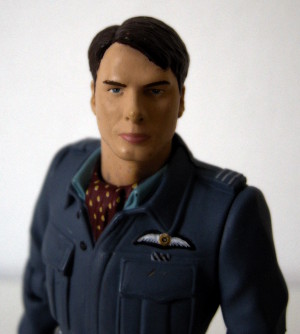 Character Options really did a wonderful job with their range of Doctor Who action figures, even earning the Toy Retailers Association’s Boys Toy of the Year Award in 2006, and Captain Jack is an excellent example of why they were so popular. The attention to detail on these figures is excellent – just check out the polka dots on his cravat, the RAF insignia on his left breast, and silver belt buckle, not to mention the careful molding of every fold and crease, and most importantly, a spot on likeness of actor John Barrowman, who never looked more dashing than in his pilot’s gear!

This particular version of Jack Harkness carries a 2004 copyright license, but first appeared in stores as part of the 2006 Series 1 Wave 3 figures. He was packaged with a Sonic Blaster accessory which my loose figure has lost along the way, although his slightly rubbery hands will bend to accept a variety of loose weapons from any other figures – perfect for display purposes! A popular Jack figure, he was also issued as part of the Captain Jack and The Empty Child twin pack and reappeared again in 2008 with a brand new RAF cap accessory to make him even more dapper.

With twelve points of articulation at the neck, waist, shoulders, elbows, wrists, hips and knees this Captain Jack also poses beautifully – what more could you ask of an action figure?!

Big hugs go to my sister who sent me a bunch of Doctor Who goodies in a Christmas gift parcel – thanks sis! More Doctor Who figures coming to this space very soon…!