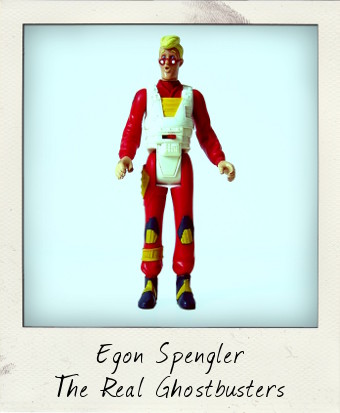 To kick off the New Year I thought I’d look at a vintage golden oldie from the hugely popular 1980s Kenner action figure line The Real Ghostbusters. First launched in 1986 as a tie-in product for the animated cartoon TV series of the same name, the series ran until 1991 when the Teenage Mutant Ninja Turtles won over fickle hearts and a younger generation, knocking Dr. Peter Venkman, Dr. Ray Stantz, Winston Zeddemore, and Dr. Egon Spengler from toy store shelves.

Kenner really raised the bar with these 5 inch figures, creating some of their most inventive toys ever – they may have only had 5 or 6 points of articulation, but every sub-series in the Real Ghostbusters line had an original interactive gimmick. 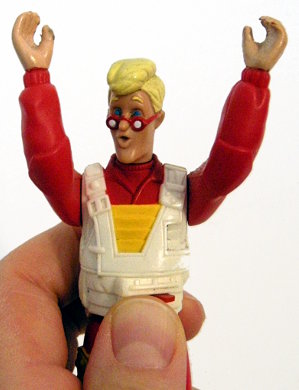 Our Egon Spengler here is from the 1989 Screaming Heroes line (date stamped 1988), in which our fearless paranormal expert actually makes a screaming sound if you attach the packaged ghost accessory to a slot on his back and wind him up by twisting his waist. Sadly this was a loose flea market find so my Egon doesn’t have his original Squid Squeal Ghost, so I can’t test if that mechanism still works, but luckily he still spins around and around a full 360 degrees at the waist if you wind him up and a lever is released on his tummy – check out the video top right!

This figure was also packaged with two further accessories – a Mini-Harpoon weapon, as well as a great looking PKE Meter – now that would a great find! Missing accessories aside, this is nevertheless, a great addition to the Real Ghostbusters collection.